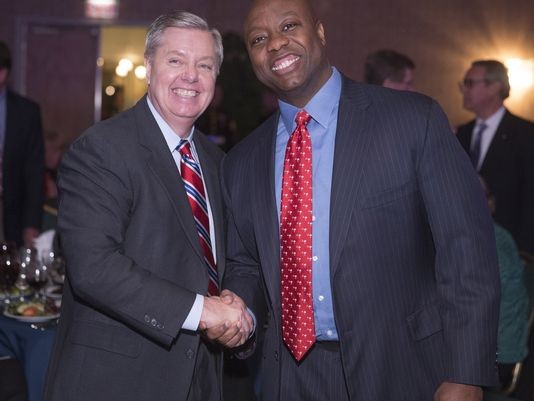 Please thank our South Carolina US Senators for Supporting the Congressional Review of an Iran Deal!

The Jewish Community Relations Council of Greater Charleston remains skeptical of Iran’s true nuclear intentions, despite the parameters for a Joint Comprehensive Plan of Action announced by the P5+1 and Iran on April 2nd. Even during the long months of negotiations, Iran continued to sponsor international terror organizations, enrich uranium, defy the International Atomic Energy Agency, pursue plans to build intercontinental ballistic missiles and hide the military dimensions of its nuclear program.

Israeli Prime Minister Netanyahu said at the Holocaust Remembrance Day ceremony at Yad Vashem on April 15th, World powers are “comatose” and “delusional” in the face of today’s Nazis, Iran, he charged.

“The main lesson of the Second World War, for democracies, is that they cannot turn a blind eye to tyrannical regimes ... Appeasement towards these regimes increases their aggressiveness ... If this aggressiveness is not curbed in time, humanity may find itself in far greater wars in the future.”

Any deal with Iran must unequivocally constrain their nuclear infrastructure so there is no conceivable means to a bomb. The global ramifications of Iran gaining access to nuclear weapons are immense. It is incumbent on Congress to consider this and not allow the United States to agree to a deal that puts Iran one step closer to nuclear weapons capability.

Fortunately both Senator Timothy Scott and Senator Lindsey Graham support the "Iran Nuclear Agreement Review of 2015" (S.615) but it would be helpful if you could send a message thanking them for their support of this important measure.

Click Here to send a message to Senator Scott.

Click Here to send a message to Senator Graham