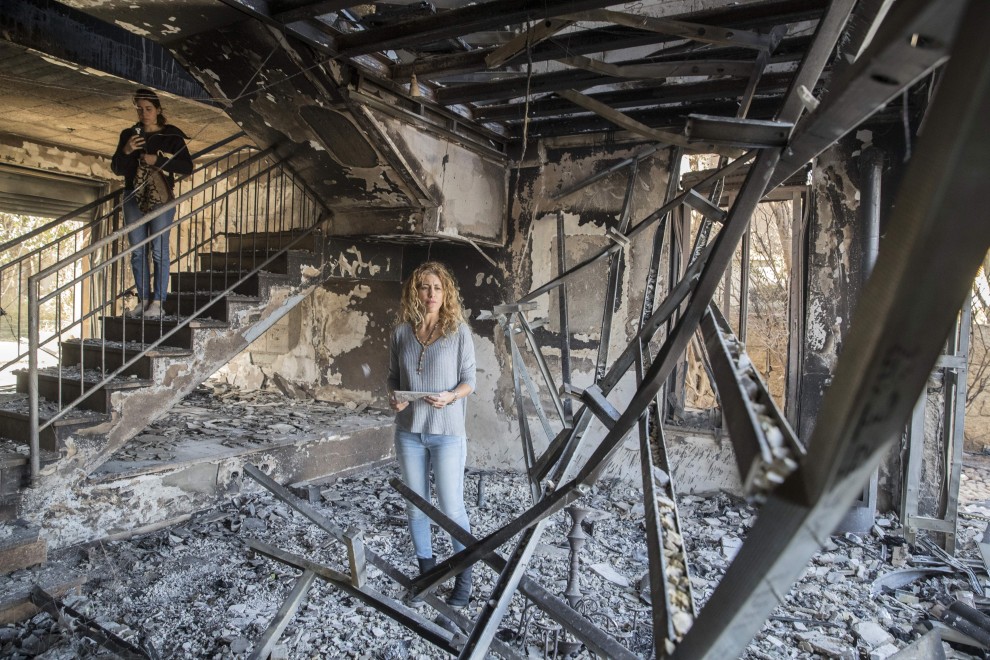 New fires erupted across Israel over Shabbat as firefighters fought blazes in Israel’s north and in the Jerusalem Hills. While damage is extremely widespread, no deaths have been reported. Some 180 people have been injured, mainly suffering from smoke inhalation. Most are in light or moderate condition.

Israel expects to continue fighting the blazes over the coming days as the dry weather and strong winds are forecast to continue until at least Wednesday, and fire fighters have been ordered to remain at the highest level or alert and preparedness for another week. At the time of writing, a number of smaller blazes continue to burn, mainly in the Jerusalem hills region.

A major fire broke out in the Jerusalem hills near the village of Nataf on Friday. At least 12 homes in Nataf were severely damaged by the fire. Evacuated residents were allowed to returnon Saturday afternoon.

Also on Friday, a fire broke out in the northern Jerusalem Hills near Kibbutz Maale Hachamisha. An Israel Police spokesperson said that they suspect that a Molotov cocktail sparked that fire.

Fires in Halamish, a West Bank settlement, consumed 15 homes and lefts tens of others damaged. A number of other fires erupted in the settlements of Dolev, Alfei Menahse and Karnei Shomron.On Saturday afternoon, a fire erupted near the Druze village of Daliyat el-Carmel, near Haifa, and was brought under control after a large firefighting force arrived at the scene.

In Haifa, where some 60,000 residents were evacuated at the end of last week due to massive fires, authorities said that around 2000 dwellings had been damaged, including 527 apartments that are uninhabitable and 37 that have been completely destroyed. More than 1,600 Haifa residents have been made homeless and a number of schools, kindergartens and other public buildings were also damaged.

Israel’s Parks Authority said that about 32,000 acres of natural forest land have burned, about 30 percent more than the 2010 Carmel Forest Fire. Most of the territory burned was in the Judean Hills National Park and the Kfir Nature Reserve. While damage to forests and homes have been extensive, quick action by authorities and local municipalities has succeeded in preventing any loss of life. In the Carmel Forest fires, 44 Israelis were killed.

Many commentators are praising the effective recommendations - and their implementation - that came about as a result of the Carmel Forest fires six years ago. Following that disaster, a complete overhaul and restructuring of Israel’s firefighting capabilities took place, including major investments in new equipment as well as new emergency fire protocols.

Similarly, in the current crisis, the government was quick to act and request back up resources from other countries, including the Supertanker from the U.S., considered to be the world’s most effective firefighting plane.

In total, 29 firefighting aircraft from around the world have been put into action across Israel. The American Supertanker operated at the Nataf fire in the Jerusalem hills on Saturday. Its operation forced a temporary closure of Route 1, the main Tel Aviv-Jerusalem Highway.

Over the weekend, police arrested 23 individuals on suspicion of arson or incitement, bringing the total number of those arrested to 35. Officials believe that the initial fires last Wednesday started due to weather conditions and that later in the week a small number of individuals were inspired to commit arson.

In addition, according to IDF spokesperson Peter Lerner, over the past few days security forces have arrested over 10 suspected Palestinian arsonists attempting to ignite fires in the Judea and Samaria region.

The Cabinet will hold its weekly meeting at the Haifa Municipality today, in solidarity with that city.

On Saturday night, Finance Minister Kahlon announced that the government will provide a stipend of $650 (2500 NIS) per person to those who fled fires and could not return to their homes. Kahlon also stated: “We will stand by our residents even after the smoke clears.” He explained that he has given instructions to government representatives to “be clear, be generous, and don’t let [those affected] drown in paperwork or be passed around from government official to government official.”

In addition to Minister Kahlon’s words, there have been repeated strong statements from the prime minister, interior and internal security ministers, mayors and others, saying that the government will take responsibility for assisting people whose homes have been damaged and for managing a national compensation effort.

In theory, damage from fires that resulted from acts of terrorism would be covered by government funding (through Bituach Leumi- the National Insurance Institute); and such fires would not normally be covered by private insurance policies. At this stage, it is too early to determine which fires will fall into which, already murky, categories.

The place of philanthropy in mitigating the impact of the fires is still being clarified. Despite the statements and declarations of politicians – admirable as their intentions are – it is also clear that there will be gaps in services and needs. However at this stage it is not yet clear what these will be. For now people are being directed to their local regional council or municipality for assistance. Civil engineers and damage assessment teams are already fanning out to inventory the situation. A primary focus is on returning basic services, such as water and electricity, and helping families who have been dislocated, alongside reopening important institutions such as schools.

The Ministry of the Environment yesterday warned of “high air pollution” in southern Israel, due to the fires. The ministry recommended that anyone suffering from heart and lung problems, the elderly, children and pregnant women in those areas remain indoors.

Public Security Minister Gilad Erdan yesterday stated that the fires were not necessarily over, but were broadly under control, and that emergency forces were deployed to deal with new outbreaks. “A lot can happen between now and Tuesday,” when the weather is set to change and winds to die down, “but with God’s help, we should be able to deal with all events.”

The Jewish Agency for Israel
The Jewish Agency is in contact with six of its absorption centers located in cities that have been hit by the fires. The centers house over 350 people. At present, none are in danger and the Agency is working to calm residents, conduct fire drills and remain in close contact. In addition, a number of Agency absorption centers have taken in people evacuated from the fires, including the Amigour housing facility in Kiryat Yam, which opened its doors to provide nursing care for 22 elderly Holocaust survivors who were evacuated from their nursing facilities in Haifa.

In addition, the Agency is considering providing cash grants to families whose homes were destroyed or significantly damaged and which are uninhabitable for the foreseeable future.

The American Jewish Joint Distribution Committee (JDC)
The American Jewish Joint Distribution Committee (JDC) is continuing to focus on their target populations: Israel’s most vulnerable -  elderly, individuals with disabilities and the extreme poor.  It is currently working with municipalities to determine how many of those evacuated and whose property was damaged are amongst those target populations.   In addition, JDC continues to operate a 24 hour call center in Hebrew for individuals with disabilities.   The organization has expressed a need to create a similar call center in the Arab and Russian languages.  Moreover, JDC is considering a “Help the Helpers” course for firefighters, once the emergency has passed.

The Israel Trauma Coalition (ITC)
The Israel Trauma Coalition (ITC) is working with the smaller municipalities (all except Haifa and Zichron Ya’akov) to do a mapping of trauma needs.  On Thursday and Friday, ITC was called in to provide trauma relief at the Carmel Hospital, evacuation centers, and to provide backup to existing welfare teams in Haifa. The municipality in Haifa has requested further assistance from ITC in providing direct care to some 1800 individuals in the city, 20 emergency welfare teams, and 8 institutions that were evacuated. Similar requests for assistance have come in from Zichron Ya’akov, Halamish and Tel Mond.   ITC is considering adding another emergency call line in Hebrew and Russian which in addition to helping direct people to municipal services being provided, would help identify potential trauma.