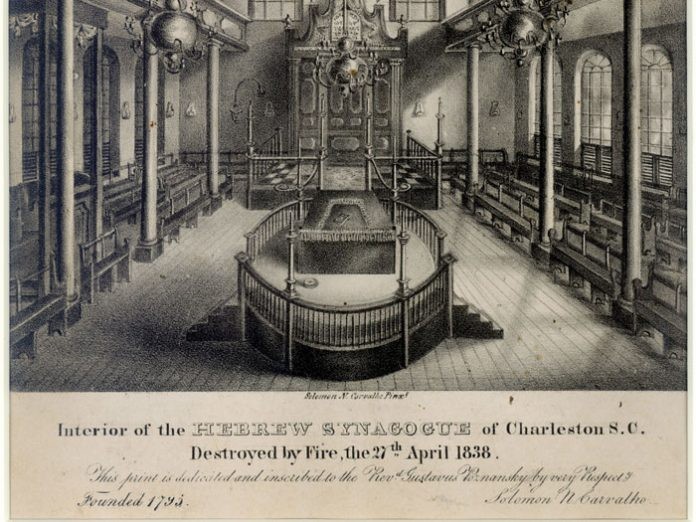 Charleston, South Carolina is a small Southern city renowned for its history, charm and beauty. Tourists flock to tour this famous place where the first shot was fired in the Civil War, where the architecture is a display of grace and Southern charm, the beaches are pristine and where one can catch a glimpse of dolphins on Charleston’s famous Battery. Over the past few years, Charleston has been voted the number one tourist destination in the U.S., and even the world. But few know about the true hidden jewel of Charleston.

Located a scant few blocks from all of the action, sits a beautiful shul in downtown Charleston, Brith Shalom Beth Israel (BSBI) that houses one of the longest-standing minyanim (prayer services) in the United States, a shul that as legend states, never missed a minyan during the Civil War. In a city that has arguably 10,000 Jews, most of whom are unaffiliated and maybe 40 shomer Shabbos family units, a continuous daily minyan is quite an accomplishment.

This minyan, as you might imagine, is not like many other minyanim that you’ll find in New York, Chicago, or L.A., which will be made up of mostly homogenous crowds; kippa-clad men in suits or work attire or retired gentlemen in khakis and polo shirts.

The minyan at BSBI is made up of Jews who are young and old, in all forms of dress, including the man who comes every day wearing a different T-shirt with slogans that are sometimes so incendiary that the rabbi often has to hold back a laugh when he sees them, as he delivers the mid-minyan class. There are middle school students who have been attending minyan for about three years now, who choose to wake up early so they can help out with the minyan before they go to school. There is Melvin "the paginator", who has been announcing pages for seventy years and knows every page number of the siddur and machzor by heart; minyan only officially begins when he announces the page. Every Orthodox rabbi of the community, including the Chabad rabbi daven together at this very unique minyan. And what is truly remarkable, is that about half of the minyan’s devoted members, are not religiously observant, donning their kippot for minyan alone. Despite their lack of a religious lifestyle, for many of them, minyan is a commitment and it trumps all else.

But there is something else about this eccentric minyan that makes it truly different from all other minyanim that take place across the world. And that is the strange sound of the word “Lach”, a word which is repeated joyfully by the congregation, at varying intervals as the Shliach Tzibbur (the person leading the prayers) repeats the Modim during Shmoneh Esrei. This practice was started a few years ago by Oskar, a renowned barber in Charleston, who found the word intriguing and decided to repeat it aloud. For some reason, this caught on until much of the minyan also started repeating “Lach”, becoming a BSBI custom of sorts.

There are of course the moments of hilarity when a tourist is leading the services only to be interrupted  at Modim by “Lach, Lach, Lach” from the crowd, and jumps nervously, wondering what he did wrong to elicit such a response, until the rabbi with a half-smile, indicates for the Shliach Tzibbur to keep going. Or on Rosh Hashana, when the shul is filled up with congregants who are unfamiliar with the weekday eccentricities and at the emergence of “Lach!”, puzzled faces turn to their neighbors, clearly wondering why so many of them are making strange sounds in the middle of the prayers. And the Rebbetzin, who hears Minyan stories at dinnertime, stands with her shoulders shaking in mirth.

A few months ago, BSBI’s beloved Oskar had a stroke. He lay on the floor for sixteen hours before anyone knew what had happened and by the time he was found, half of his body was paralyzed. He told the rabbi in the hospital that his grandfather, for whom he was named had also had a stroke on the exact same date but his grandfather had died. Oskar believed he survived his stroke because of his commitment to minyan.

As Oskar recuperated in the rehab, he was not able to attend minyan and he was sorely missed. He told the rabbi that what kept him going was he wanted to get back to cutting hair and... to minyan. So his minyan pals decided to give Oskar a gift for Chanuka as a way to fulfill this wish.

On the second night of Chanuka, the BSBI minyan which always takes place at the shul moved their services to Oskar’s rehab. Despite it being winter break and with many regulars away, thirty men squeezed into a conference room to make minyan at the rehab. They donned specially-made blue T-shirts that read “Lach Squad”- “it’s all for the boss- and Oskar too”. As the Rabbi, who was leading services neared Modim, he heard the rest of the crowd gearing up, urging each other to be quiet and allowing Oskar to start them off for the grand moment. Surrounded, by his friends and fellow minyan-goers, Oskar shouted out “Lach” at the end of Modim for the first time in months, followed by the echoes of his friends, amid tears in the crowd. And following davening, Oskar led his friends in the lighting of the Chanuka candles.

It’s a sweet story but this two-letter word that Oskar found so intriguing- this “Lach” that created such a camaraderie in the shul- is truly what it’s all about. Why do men wake up early, rearrange their schedules and make it such a priority to come to shul to pray together? Why do women take on all the responsibilities at home, often at tremendous hardship to allow for their husbands to attend minyan? It all comes down to one word- “Lach”- it’s for You, Hashem. In our busy lives juggling work and family and everything we need to get done, it’s about taking a break from our tunnel vision to realize that there is something greater than ourselves and our own daily agendas. Coming to minyan is about setting time for prayer, for learning and for helping a friend have a minyan if he needs to say Kaddish. It’s about making time for God in our lives and for living life with greater purpose. It’s Lach- it’s all for You. Lach is truly the centerpiece of minyan. But more than that, that small word is a reminder of what should be the focal point of our lives.

And so in a small Southern city, known as the Holy City because it has more churches per capita than any other city; in a city whose Jewish population is fighting rampant assimilation, there is a  small minyan that shouts out Lach. And each time they do, they serve as a spiritual beacon for us all as as they remind us what it is truly all about.

Ariela Davis is the Director of Judaics at Addlestone Hebrew Academy and the Rebbetzin of Brith Shalom Beth Israel, the historic Orthodox synagogue of downtown Charleston, South Carolina. Ariela has taught Jewish law in various communities and writes and speaks about topics related to Jewish thought and Israel. She and her husband, Rabbi Moshe Davis are the proud parents of four children.