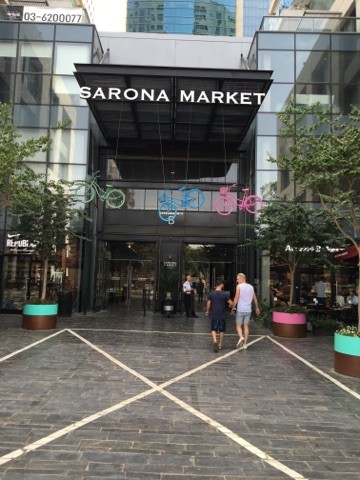 Last Saturday afternoon (4 Jun), I spent about three hours wandering through Sarona, the neighborhood of renovated German Templar houses on Kaplan Street in downtown Tel Aviv. I was amazed to see this big, new beautiful building: SARONA MARKET. Hey, this wasn’t here last year, I thought to myself … and went right in, accepted easily by the security guard as I was anxious to get out of the blistering heat.

Yesterday afternoon (Wed 8 Jun), my first awareness of the murderous terrorist attack was an urgent text: “Turn on your television” from Madeline, a friend in Jerusalem. I stopped everything. And there it was on CNN. The blue lights, sirens, police uniforms, Magen David Adom (Israel’s Red Cross). The crawl at the bottom of the screen said three people dead, five injured. Today, the dead number four and five who survived … the four, by now, already buried, quickly according to Jewish law. They’ve left families -- wives, children, siblings, parents -- whose lives will never be the same again. Four innocent people. Four innocent people who were only enjoying an afternoon at the beautiful Sarona Market.

Let me tell you what Sarona Market is. It’s an indoor, up-scale, sophisticated modern food emporium with individual shops selling local and imported delicacies, coffees and teas from exotic places, luscious ice creams, pizza, sushi, hundreds of different wines, beers, and cheeses from around the world, chocolates, fresh fish, kitchen shops and breakfasts, lunches and dinners in the many restaurants and cafes.

A tapas shop caught my eye: ‘a glass of wine of your choice and three tapas’ from a selection of about a dozen for 25 shekels, that’s about $6.00. How could I not. It was time for a snack. Delicious, each one was.

Sarona Market has become the place for couples, young people with children and retirees – people of all ages -- to spend an afternoon or evening. Locals dominate and yet I did recognize fellow tourists from other countries.

The surrounding gardens have several modern, safely-designed playgrounds for children, small cars for children to ‘ drive,’ a lily-pond bordered with tall blue agapanthas and hollyhocks taller than I am. Landscaped, maintained, renovated, historic homes and umbrella-shaded patios. Sarona.

All of this was brought to a standstill yesterday, actually Wednesday afternoon in Tel Aviv, by two Palestinian cousins from the same small village, disguised as orthodox Jewish men – black hats, black suits. This is how they celebrate Ramadan, by killing innocent Jews? This is what Ramadan and Islam is all about? One terrorist was shot and taken by ambulance to Ichalov Hospital which is within a few blocks of Sarona. I have to ask myself, why should he receive medical care and attention by Israeli Jewish surgeons? Why not just let him die, as these four Jews died by his hand, by his automatic weapon.

It’s hard for me to move ahead in my own life today as this attack has burned deeply into my consciousness. My heart hurts for those lost souls and for those who are grieving. The entire country is grieving – that’s how it is in Israel. It’s a small country and everyone feels the grief of others because they are so connected. Connected by family, connected by friends, connected by the bonds forged in the IDF. Everyone grieves.

It’s hard not to think of that cliché: there, but for the grace of Gd, go I.