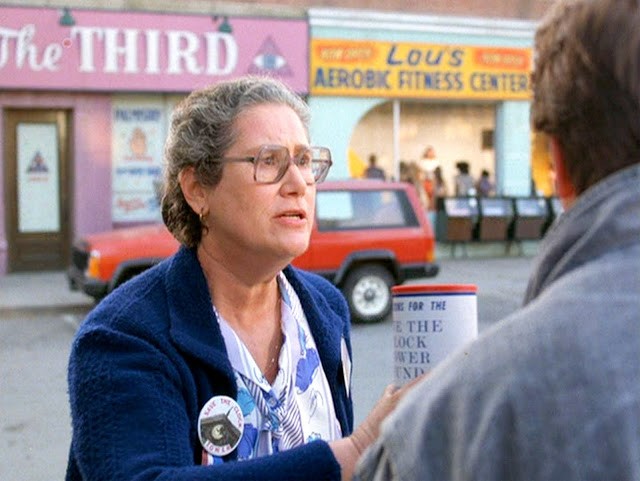 Elsa Rabinowitz, better known by her stage name Elsa Raven, died peacefully at home on November 2, 2020, at the age of 91.  She was born on September 21, 1929, in Charleston, SC, the fourth child of Louis and Rosalie Rabinowitz.

Elsa started her acting career on stage in New York City, where she also assisted Joseph Papp in bringing the Free Shakespeare Festival to Central Park.

Elsa was a character actress who had small but memorable parts in many movies - among them the Save the Clock Tower lady in the original Back to the Future, the realtor who sold the house in Amityville Horror, John Malkovich's landlady in In the Line of Fire, Gertrude Stein in The Moderns, the mother who lost her son in Fearless, Ida Strauss in Titanic (where most of her scenes were cut, but she was featured in the Celine Dion video as half of the older couple in the stateroom where water poured in).  She had regular TV roles as Inga the Swedish maid on Amen, as Vinnie Terranova's mother Carlotta on Wiseguy, as Lucille on Days of Our Lives, and as Tugboat Tessie on General Hospital.

She was a proud voting member of the Academy of Motion Pictures Arts and Sciences, diligently watching many movies every year.

Elsa will be remembered for her great kindness and generosity, as well as the magic she brought into the lives of her 15 adoring nieces and nephews.  Her siblings Ida Schwartz, Faye Olasov, Ben Rabinowitz and Mervin Rabinowitz predeceased her, as did her nephew Nathan Olasov.  She is survived by her sister-in-law Lynne Rabinowitz and her large extended family.  The family wishes to thank her friends/caregivers Katsy Chappell and Yenni Maruanaya.