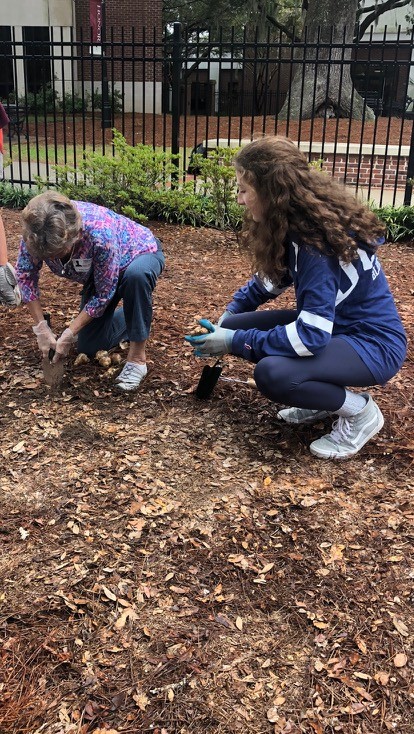 Sophie Levenson particiipated in the first cohort of the Charleston Jewish Federation REMEMBER Project. This group of teens is committed to bringing Holocaust education and genocide awareness resources to their schools and communities. Each year, they have the opportunity to meet local Holocaust survivors and their descendants. Read on to hear from Sophie Levenson, junior at Porter-Guad, how she has been inspired by Ann Fields. You can read Ann's story here in this year's edition of the Post and Courier's Holocaust Supplement.

When a Holocaust survivor says the name “Hitler,” it hits like a bullet in the chest. The pain and history of a persecuted people, of a resilient people, comes out in the harsh consonance of the name. It is hard to listen to—I can only imagine how hard it must be to say.

This is not a story about Hitler, though. Too much of our remembrance in regards to the Holocaust is directed towards the villain, when our minds should instead be with the heroes; with the survivors, and with the lost souls. So this is a story about a woman named Ann, and how she has shaped my perspective as a young Jewish woman.

Ann Fields is a character who demands attention. She speaks with conviction, intention, and indomitable confidence, and captivates any audience who is lucky enough to hear her speak. In truth, I think Ann shocks people. She has a cutting wit and is not afraid to be transparent—not afraid to share the worst moments of her life, the scariest, the dirtiest; not afraid to share her darkest thoughts and boldest opinions. Anne is a woman of tiny stature but enormous presence, and she is an inspiration in every sense of the word.

I first met Ann as a Sophomore, in a Jewish Life gathering at my school. Ann has an affinity for gardening, and had come to help our group plant a daffodil garden at the front of campus in memory of the lives lost in the Holocaust. I remember being almost taken aback by her strength and tirelessness as we gardened on our knees in piles of mud—she was not in any way hindered in ability by her age or tininess.

When we had all planted our fair share of daffodil bulbs, Ann rose to address the group. She shared parts of her story; like most Holocaust survivors that I’ve encountered, she retained an almost unnerving amount of detail, remembering moments of her life from seventy years ago as if they had happened only days before. I suppose that is what happens when the early years of a person’s life are cloaked in trauma. And I suppose living with the knowledge that one’s life is a piece of priceless human history provokes the mind into remembrance.

When Ann was finished speaking, I raised my hand and somewhat nervously asked her the question, “Do you still believe in God?” This subject is, to me, intensely fascinating. The way that Judaism has shifted and formed itself around the events of the Holocaust is unique to every Jewish person; for some, the cruelty that occured is proof that there is nothing to have faith in; for others, the survival and resilience of the Jewish people is indicative of a benevolent Jewish God. But in both cases, the collective nature of the Jewish tradition persists, and communities are bound together like families by ties that are perhaps even stronger than blood.

Ann told me that her faith in God disappeared after the oppression that she suffered through. “It was a religion,” she said, shrugging her shoulders in resignation to a horrible truth—the truth that our people died simply for their faith and culture. “And if I go to Hell,” she continued, “at least I’ll be warm.” Those words have resonated through my mind for years. They are Ann, in a phrase; they are sharp and memorable and witty, and they are laced with fearlessness and empowerment. Ann is not afraid of what lies after death—she has already been through Hell—and she feels no need to adopt a pretense of God-faring faith when she has none remaining.

Ann Fields says Hitler’s name boldly, loudly, even brazenly. It shakes me to my bones. But her confidence and bravery is her greatest strength, and her persistence in telling her story and calling out the villain reminds her audiences to remember. There is no gentle way to talk with candor about the Holocaust, as there was nothing gentle about the way it happened, and Ann is a reminder of that. Her years as a young woman were poisoned with the weight of persecution, loss, devastation, and a life led purely to avoid death, and as difficult as it must be to relive, Ann knows that her story is one powerful enough to incite a whole generation to action in the pursuit of preventing a second wave of fascist devastation. She exists as a paragon of resilience and serves as an excellent role model in her community. But Ann is an iconoclast—she bends the rules to the breaking point more often than not, always animated with the incredible spirit that somehow has survived through so much. Ann Fields does not just survive—every day, she lives.