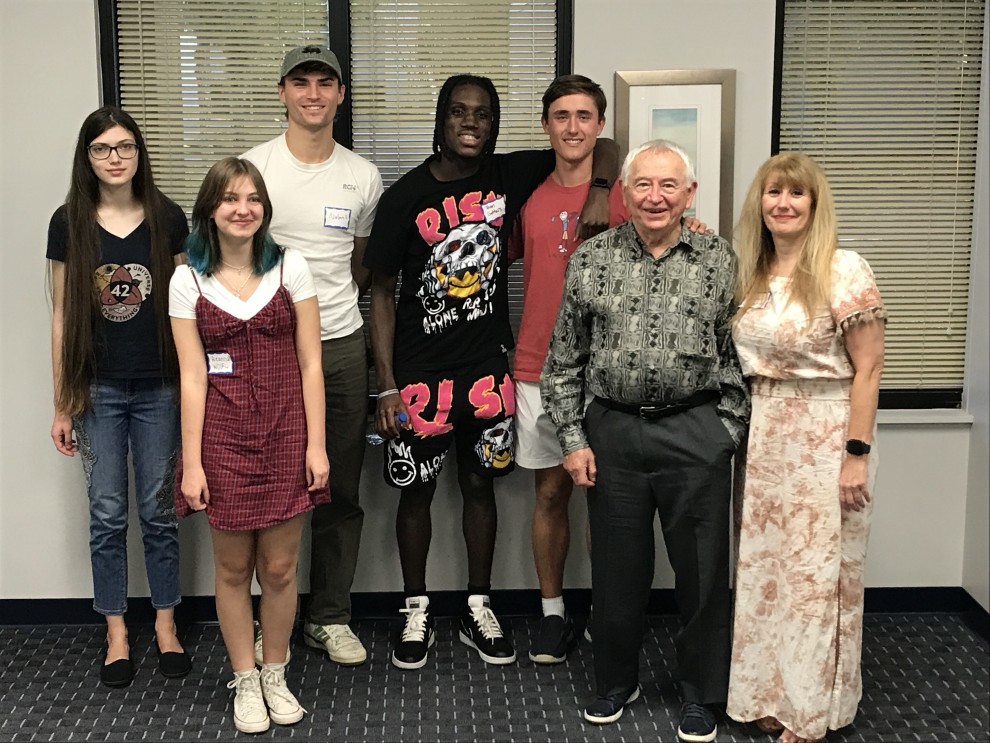 On November 6th the forth cohort of the Remember Project met in person to hear from Holocaust Survivor, Harry Schneider. You can hear a bit about his story here. This year's Remember Project cohort is comprised of 11 teens from diverse backgrounds. These 11 teens represent eight local public and private schools in the greater Charleston area. Read below as Luke Walmet, Senior at Bishop England shares about the fourth cohort meeting.

Today, the Remember Project Cohort had the good fortune of hearing the testimony of Harry Schneider, a Holocaust survivor, at the Federation’s offices in Charleston. Schneider was born in 1937 in Poland, shortly before World War II erupted as Hitler-led Nazi Germany invaded his native country in 1939. Schneider’s father saw the detriment occurring to the German Jewry and decided the family must leave the country at once. As the nation was split between Germany and Russia through their non-aggression pact, Schneider’s father was taken to be a soldier in the Russian army as Harry and the rest of his close family evacuated eastward. They lived in a forest for two years in Eastern Russia, completely lost, before being shipped off far east away from the battlefront. They lived in an impoverished, miniscule town in Russia for four years in dire conditions. After the war ended in 1945 and Germany was defeated, they went to Austria to a displaced persons camp. By some incredibly good fortune which Harry was seemingly unable to even process himself, he and his family were reunited with his father. The family came to the United States in 1950 where Harry has had a successful career in business, married, and had children and grandchildren.

The testimony of Harry Schneider was amazing for the Remember Project Cohort to witness. Schneider was calm, reflective, and kind-hearted in delivering his message. Still possessing a keen emotional connection to his experiences, he has perspective on both the unthinkable evil that occurred but the great fortune he and his family had to survive. He was thorough in sharing his story and even more so in answering the Cohort’s questions. Schneider was adamant in the necessity of combating hate and prejudice in the present day as he understands first-hand how these can escalate into real-life atrocities. His testimony is an amazing living proof of the Holocaust and its relevance in modern society and education. Sadly, he realizes that he is one of a few and decreasing crowd of living Holocaust survivors, making the experience even more impactful for the Cohort’s members to witness his testimony. Thank you, Harry Schneider!

Luke Walmet was selected to participate in the 4th cohort of the Remember Project. High school students have a rare and unique opportunity to study the Holocaust and other genocides by becoming an ambassador in their school and community through the Remember Project. For high school students looking for a meaningful and profound community service experience, this cohort is an excellent option with monthly meetings to ensure this next generation is committed to ‘Always remembering’. For more information on the Remember Program visit https://www.jewishcharleston.org/remember