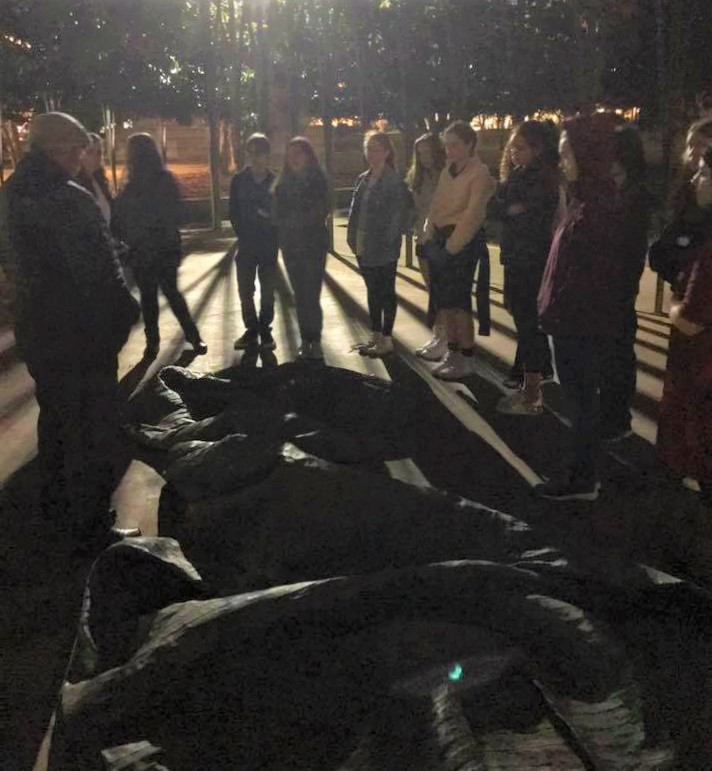 On November 18th students from across the Low Country gathered to learn from Children of Survivors, Anita Zucker and David Popowski. During the meeting Anita and David shared their stories and experience creating the Holocaust Memorial in Marion Square. Read one student's reflections on this meaingful experience below.

It is very rare for a group of students so young to be able to study and discuss, in great depth, a topic of such a weight as the Holocaust, an event of unparalleled tragedy that affected the world at a categorically tremendous cost. But the rarity of the opportunity is becoming a heavier burden on our chests each and every day, for we live in a world that moves so fast it often forgets to glance over its shoulder and ​remember​. The Charleston Jewish Federation sought a group of motivated high school students to take on the task of reminding the community that, tragic as it may have been, it is of the utmost importance that we do not forget the Holocaust.

At the most recent meeting of the newly-termed “Remember Project,” the high school students partaking in the group were afforded an opportunity that will not soon escape their minds. After gathering at the CJF’s main office, they ventured into downtown Charleston to hear from two valued members of the community: Anita Zucker and David Popowski, both children of Holocaust survivors. Each shared the stories that their parents had handed down to them and described with remarkable steadiness how their parents had lost and lost and lost until finally finding a small victory in their survival. Still, their lives were defined by the hunger, loneliness, and the indescribable fear that they had each been subject to throughout their suffering. Anita, who told her mother’s story with admirable courage, explained to her student audience the courage her mother, Rose Goldberg, exemplified by saving her niece and countless others. It is a true representation of the nightmare that she lived through.

After learning about the unique paths down which Anita’s and David’s parents were led, the Remember Project group shifted its focus to the memorial at which they stood. Proudly erect in Marion Square, the Charleston Holocaust Memorial is a work of art and engineering designed with great intent and dedication. A board, carefully comprised of some of Charleston’s most dedicated citizens, fundraised and designed the memorial to represent a few vital ideas. The border of the structure, which resembles a large iron fence, was decided upon as a representation of the confinement that the Nazis inflicted upon the persecuted. Then, at the centerpiece of the memorial, is a great ​tallit–​ a Jewish prayer shawl–that is spread across what appears to be, though concealed completely by the tallit, a body. It is an old-standing tradition for the Jewish people to be buried in their prayer shawls, and for one of the tassels, of which there are four, to be cut off its corner. If one observes closely the crumpled iron cloth that lies between the bars of the memorial, they would notice that three of the four corners bear tassels, while the remaining one does not. It is this careful choice that makes the Charleston Holocaust Memorial such a beautiful thing. Not only does it remain, through the natural challenges of thunderstorms and hurricanes, a necessary reminder of lives lost, but it also provides a proper burial for the Jewish men, women, and children that fell victim to the terror of the Holocaust. It provides them, lost as they may be, with a small demonstration of respect.

The members of the Remember Project were given the opportunity to speak about what the memorial signifies to them, and each student gave a remarkable insight and reflection. What was universally agreed upon was that the time to remember, to raise awareness, and to act is now. History cannot repeat itself, and in order to prevent it from doing so, we must preserve the memory of the lives that were taken so brutally. We must explain the cause. We must shed light on the truth before it flickers into oblivion.

As the students gathered in King Street Cookies to conclude their night of reflection with chocolate chips and sugar–a considerably sweeter subject, to be sure–the lessons of the night remained in their minds. Not only did they have the opportunity to hear from the children of two survivors, and members of the Holocaust Memorial’s board— they also learned from each other. The conclusion that was only increasingly codified at the latest meeting of the Remember Project was this: we are here to act. We are here to advocate. And we are here to remember.

*Sophie Levenson was selected to participate in the Remember Project. High school students have a rare and unique opportunity to study the Holocaust and other genocides by becoming an ambassador in their school and community through the 2019-2020 Remember  For high school students looking for a meaningful and profound community service experience, this cohort is an excellent option with monthly meetings to ensure this next generation is committed to ‘Always remembering’. For more information on the Remember Program visit https://www.jewishcharleston.org/remember