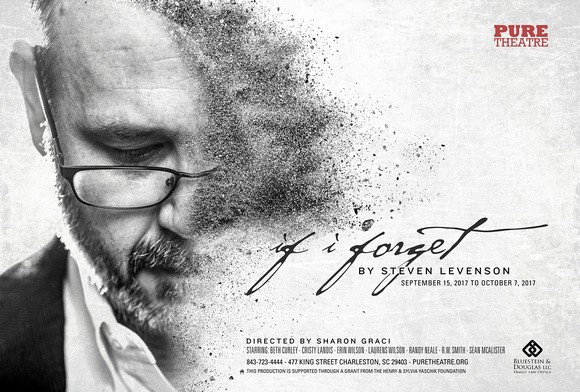 CHARLESTON, SC (August 31, 2017) - PURE Theatre will open its celebratory 15th Season Thursday, September 21st, 2017, with the Southeast regional premiere of If I Forget by Steven Levenson. A winner of the Outer Critics Circle Award for Outstanding New Off-Broadway Play, If I Forget comes to Charleston fresh from a 2017 Broadway run at the Roundabout Theater in New York.

In this powerful tale of a family and a culture at odds with itself, liberal Jewish studies professor Michael Fischer has reunited with his two sisters to celebrate their father’s seventy-fifth birthday. Each deeply invested in their own version of family history, the siblings clash over everything from Michael’s controversial scholarly work to the mounting pressures of caring for an ailing parent. As destructive secrets and long-held resentments bubble to the surface, the three negotiate—with biting humor and razor-sharp insight—how much of the past they’re willing to sacrifice for a chance at a new beginning.

If I Forget opens Thursday, September 21st, 2017, and runs through Sunday, October 8th, 2017. Regular performance times are Thursday through Saturday at 7:30pm with an added matinee performance at 3:00pm on Saturday, September 30th.

The Jewish community is encouraged to see the play any night, but especially for the October 8th performance, when many members of the Jewish community will be there and we are working on providing a talk-back.  There is a group discount for $23.00 tickets, rather than the regular $25.00 price. The discount will be accessible by calling the box office at 843-723-4444 or online with the code: jewishfederation.
Tickets for If I Forget are on sale now at www.puretheatre.org or by calling the box office at 843.723.4444 Tuesday through Friday 12-5pm. The PURE Theatre box office is located at 477 King Street.

This production is supported through a grant from the Henry & Sylvia Yaschik Foundation and in collaboration with the Charleston Jewish Federation.