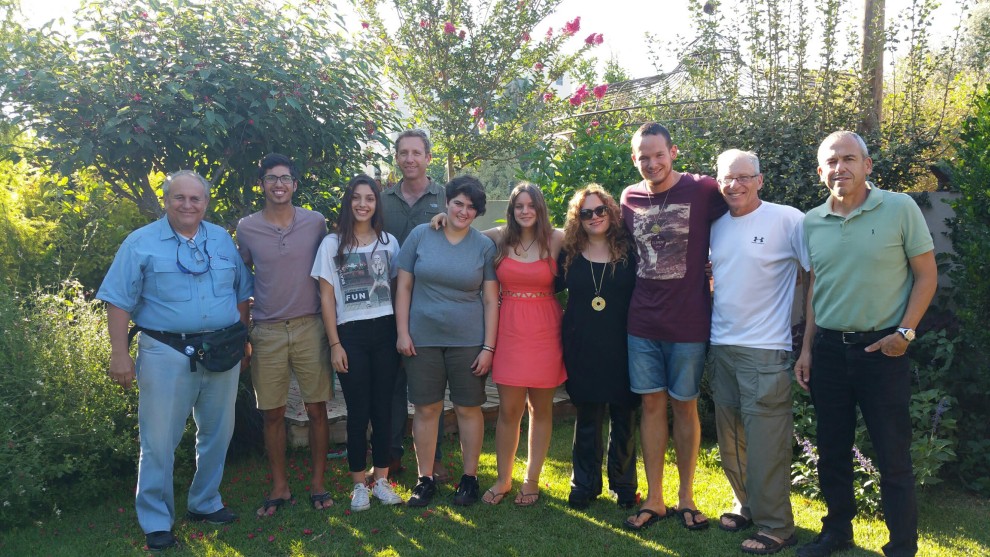 Recently, as part of a larger Israel trip, we visited with two Israeli enterprises - the Hadera-Eiron Regional (H-E R) Council’s “Parnership2GETHER” (P2G) with which Charleston Jewish Federation (CJF) is actively involved, and “HaMidrasha” (meaning the “place of study”) which promotes Jewish renewal for Israelis and is also connected to Jewish Federations. The commonality of these two organizations and their programs is that they both bring together Israelis and Diaspora Jews, like us, to bond and support each other.

As “Israelophiles” who have been to Israel many times, we were looking for a different Israel experience.  Our visits with the P2G group and with the HaMidrasha folks met the bill and were highlights of our trip.  Thanks to CJF and, in particular, to Ava Kleinman, for introducing us to these two organizations.

Partnership2GETHER (P2G) is a program of the Jewish Agency for Israel.  It provides a platform for building interpersonal bridges between Diaspora Jews and Israelis, based upon our shared Jewish identity. CJF recently re-joined nine other communities across the Southeastern United States to bond with the people of the Hadera-Eiron Region of Israel (H-E R) of Israel.  Among the many opportunities, CJF is taking the lead in developing a young adult leadership program for joint study, leadership learning, and travel between Israel and the US, which will launch in fall 2015. The H-E R is situated about 25 miles north of Tel Aviv along the Mediterranean coast. It is a vibrant, growing, multi-cultural area. We spent a terrific day with Charleston’s P2G Israeli partners. Our principal Israeli hosts, Doron and Elisha, were hosted by us in Charleston, with great pleasure, this past March.

During our day, we met several young Israelis who were part of an H-E R leadership development program. Some of these young people had participated in exchange visits where the Israelis and Americans hosted each other in their respective homes in the US and in Israel. The others we met were looking forward to their future turns to exchange visits with American teens. We were quite impressed with these young people.

With Doron and Elisha, we also visited a unique institution, Neve Michael, where abused children, who have been removed by the courts from their homes, reside, are educated, receive counseling, and are otherwise cared for. It’s the only one of its kind in Israel. The director introduced us to Israeli young adults who are doing their national service and North Americans who volunteered to spend part of their summer helping out. It was quite moving.

For the last part of our day, we were treated to a driving tour which included stops at critical locations and vantage points with commentary by our “guides” about the geopolitical situation facing Israel. The entire experience was truly special and reflected the essence of the P2G program – developing personal relationships between Israelis and Americans.

HaMidrasha at Oranim is located on the campus of Oranim Teachers College in Tivon, Israel.  Since its establishment 25 years ago, HaMidrasha seeks to promote the renewal of Jewish life in Israel.

While surely connected to Israel - the state, and the land - many Israelis apparently do not feel similarly connected to their religion, but want to become more so. Through a number of interesting programs, HaMidrasha is addressing that desire. We met two very impressive young Israelis who were or had been participants in a “gap year” program, called “mechina” or “preparatory course,” for Israeli youth between their high school graduation and military or national service. Another exciting HaMidrasha  program involves an annual hiking event, called “Encounters on the Israel Trail,” which brings together participants from across Israeli and Jewish society to experience nature, history, and dialogue. This program recently was honored with the prestigious Jerusalem Award for Israeli Unity. Raya and Yossi Ofner, founders of “Encounters on the Israel Trail,” were among those we met at HaMidrasha. Hiking the Israel Trail (similar to our Appalachian trail), which would be fun by itself, is enhanced by having the option of participating in learning and discussing texts along the way. While the entire hike is two months in duration (February to Passover), participants may join the hike at any point along the trail and spend as much or as little time as they choose. Participants, Israeli and others, range from children to seniors. This seems a great way to see Israel, to meet and spend quality time with the people of Israel, to learn from them and to bring them a Jewish prospective from the Diaspora.

Our visits with H-E R and HaMidrasha were extremely worthwhile. They allowed us to further our connection to our warm and interesting Israeli hosts. They provided the “off the beaten path” experience we sought and insightful perspective on Israeli life today. Based on our experience, we strongly recommend that anyone from the Charleston Jewish community planning a visit to Israel, or who are otherwise interested, consider pursuing unique experiences such as these.

For more information about these programs, or to start planning a visit to Israel that meet your specific interests, please contact CJF