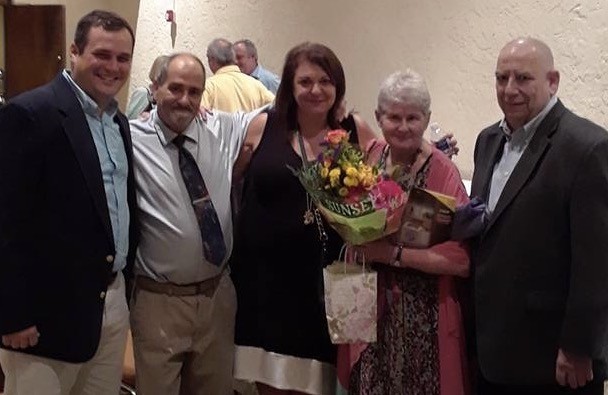 Robyn Wittenberg Dudley and Patrick Labbe are recipients of the Charleston Jewish Community Center Without Walls 2017 Volunteer of the Year Award. This is the speech that Robyn presented at the annual meeting where the award was presented:

Patrick Labbe and I would humbly like to thank you for our award as volunteers of the year. Tikkun Olam, repairing the world, is exhilarating but exhausting as many volunteers would say. I was reflecting the other day on why things happen for a reason. In my case, I think it is because it’s time that I gave back for what I have been given. I grew up in Augusta GA in the Wittenberg family with very philanthropic parents who gave with their time and their money not only to the Jewish community but to the entire community at large. They have both recently passed on, may they rest in peace, and now I have big shoes to fill but I am following in their footsteps.

Patrick and I live in the sweet town of Summerville in the fastest growing county in South Carolina. The families that are moving to our area need a great quality of life including Jewish life. So, I am a town cheerleader and Patrick and I have helped to bring Jewish awareness to Summerville by working with the Jewish Historical Society of South Carolina and the Summerville Dorchester Museum to dedicate a marker to Summerville Jewish heritage. Saul Alexander came to Summerville from Ukraine for a better way of life, died a millionaire bachelor in 1952 and left his money to a foundation which funds so many cultural and educational initiatives in the tri county area.

Many of you know Doris Meyers who helped make the Chosen Treasures gift shop at KKBE blossom and you know Rosalyn Kramer who sings at KKBE. Her brother Sammy Kramer sat on Summerville Town Council.  Margie Lynch's husband Seymour operated a dress shop and liquor store and the Lynch family still owns retail property in Summerville. We have Mark Deitch who owns Oscar’s restaurant and on and on.  These contributors from Summerville needed to be recognized and now they are. We are proud volunteers who helped make that happen.

Patrick and I, with the support of Daniel Stern and the Charleston Jewish Community without Walls, started the Summerville CommUNITY Artists Heritage Series a year ago and it has been a resounding success. And you will notice that we always spell UNITY in all caps when we write CommUNITY.  Who knew that there are almost 200 Jewish people in the Summerville community now!? Many of them have come to these programs and are finding Jewish life in Summerville that they did not know existed.  Charleson Jewish Federation's PJ Library program is now in our community and we are having a tashlich program in September at Gilligan’s dock in Moncks Corner so it’s convenient for our Summerville Del Webb friends and others.

We have been advocates for unity in Summerville and have partnered with the Community Resource Center to provide diversity and inclusion for the Summerville community. Every month we have a different theme but everything connects to our Jewish heritage and culture. Philip Lipton played some of the music at our celebration of holiday diversity where we featured Chanukah, Christmas, and Kwanzaa to an overcapacity audience. In January we featured Robin Shuler of KKBE who led the audience in singing kosher gospel for black history month. Diny Adkins, a Holocaust survivor, touched a diverse crowd with her story. As part of the Charleston Jewish Federation's REMEMBER Program for Holocaust Education and Genocide Awareness, we had over 70 people get up after the Holocaust proclamation was read at Summerville town council and walk silently with candles to the nearby Saul Alexander Garden where memorial candles for Holocaust victims were lit. This was the first time a Holocaust proclamation was read in Summerville, and the first time a rabbi, Rabbi Michael Davies of Congregation Dor Tikvah, addressed Summerville's town council. We want to thank Manny Cohen who has a business in Moncks Corner near Summerville who was so inspired by our work that he has donated annual support to the Summerville/North Area Jewish community.

In July we had an unprecedented program for our area called Shared Struggles where members of the Jewish, Christian, and Muslim communities sat on a panel in front of a packed house and discussed challenges each faces in today’s society. Rabbi Greg Kanter of KKBE eloquently represented the Jewish community and Patrick was instrumental in planning and executing this program. Great comments and questions from the audience surfaced and we’d still be in that program right now if we had not had to end it so we could all go home! We have had interest in Israeli dancing classes and hopefully we have found someone to teach them and they will start after the high holidays.

We are making the front page of our local Summerville Journal Scene newspaper not just yesterday with the very successful Back To School Bash which the Summerville/North Area Jewish Community and the Charleston Jewish Community Center Without Walls helped sponsor but with many of our events. This brings Summerville Jewish awareness to the entire tri county area. Soon there will be enough of a Jewish presence to support a community facility. In the meantime, our home is at the Saul Alexander Masonic Lodge and Patrick and I look forward to continuing to participate in growing the Summerville/North Area Jewish community. Patrick maintains a daily inspirational Jewish email message and you can request to join our Facebook page or visit our website (links below).

The Summerville/North Area Jewish community is small but mighty and Patrick and I are proud to volunteer for our community. Come visit us and experience the sweet Jewish life we are living! Todah rabah and thank you.