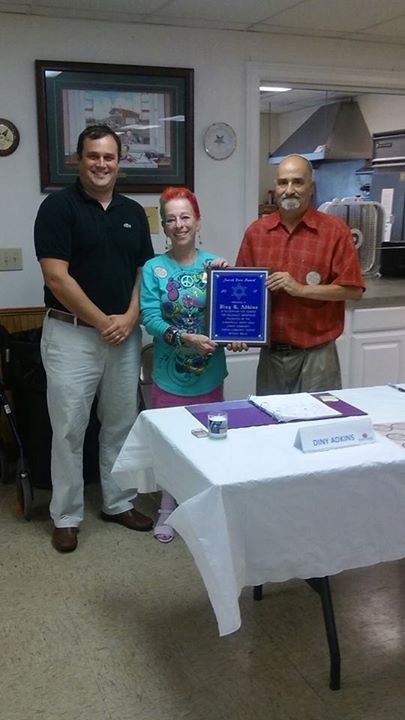 On June 25th, the Summerville/North Area Jewish Community, the Jewish Community Center Without Walls and the Community Resource Center presented a very special program on the Holocaust with speaker Diny K. Adkins. Held at the Saul Alexander Masonic Lodge the audience listened for over an hour as Diny Adkins described the horrors she and her family faced during the Holocaust. She was hidden by nuns and told her parents were dead. Adkins lost 85 relatives during WWII. After the liberation, her parents who were also hiding, came to claim her. Diny then came to the United States and has spent much of her life telling her story to all but most especially the youth who she educates about the ups and downs of life, about tolerance, about bullying, suicide, love, and peace. Proceeds from sales of her book "Can Forgive, But Cannot Forget" are donated to Homeless and Wounded Veterans and the Holocaust Museum in DC. As local guitarist, Ulyana Machneva, played, the diverse and inclusive group introduced themselves and asked Diny Adkins questions.

In Recognition of Service for Holocaust Awareness

The group will be sponsoring an Interfaith panel discussion on July 30th featuring speakers from the Jewish, Christian and Muslim Faith Communities. The event will be held at the historic Saul Alexander Masonic Hall on Main St. In Summerville.

For information about ongoing Summerville CommUNITY activities, go to http://summervillejewishcommunity.org.