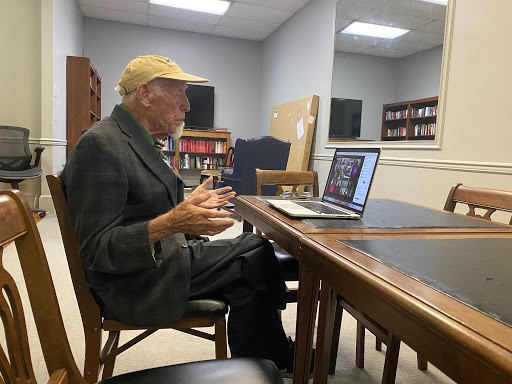 Joe Engel, Holocaust survivor and community leader, died on November 26, 2022. Joe was born on October 9, 1927 in Zakroczym, Poland to Moishe and Esther Engel. Joe dedicated his life to talking to students and other groups about the atrocities of the Nazis. Through the CJF REMEMBER Program, he spoke to countless organizations relaying what he saw with his own eyes, making sure that the six million Jews, including 1.5 million innocent children, killed by the Nazis during WWII are never forgotten. Joe selflessly traveled throughout South Carolina to tell his story to tens of thousands of students in the hopes of educating a new generation of leaders to prevent a future Holocaust.

He made an impact on many, including Leonard Pitts who recently wrote this article about Joe which was featured in the Charleston Post and Courier. This article was originally written for Trib Live and can be found here.

It’s unlikely you will know the name, especially if you don’t live in Charleston, S.C., his hometown since 1949. Joe never wrote a great novel or made a scientific breakthrough. His accomplishment was less gaudy, yet no less significant.

I met him in 2005 — the 60th anniversary of the end of World War II — on an assignment to write about an interfaith pilgrimage to Holocaust sites in Poland, which was occupied by Germany during the atrocities. We visited murder factories whose names still bespeak the immensity of evil: Treblinka, Belzec, Majdanek.

And Auschwitz, where Joe was sent in 1942 at the age of 14. A little over a million people died there, but somehow he did not. “Every morning,” he said, “you could see hundreds of skeletons. Not human beings, just skeletons. Bones. The only thing you saw was bones and a big nose. We used to pick ‘em up and they used to take ‘em to the gas chambers.”

One time, I asked him a question — don’t remember what it was — that probed a memory too painful to revisit and his lively eyes turned soft and sad. “It’s no picnic talking about it, you know,” he said in gentle admonishment.

I apologized. “It’s all right,” he assured me. “I don’t mind. I want the people to know, especially the young people, to prevent another Holocaust.”

There are, according to a nonprofit reparations group called the Conference on Jewish Material Claims Against Germany, just 280,000 survivors left worldwide, a tiny handful of aging men and women, fragile lives winking out like fireflies under a summer twilight. Soon, there will be no one left to say, on firsthand witness, this is what happened, this is what it was like.

It was a duty Joe took seriously. He spoke in schools, led at least five pilgrimages of return and was known to sit on a bench in Charleston with a sign around his neck — “Holocaust Survivor” — waiting for someone to ask. One night at a restaurant in Poland, he lifted a glass and said, in his immigrant’s English, “Don’t you ever forget me, so long as you gon’ live. You tell this story for us, because we not here to tell this story.” He was looking dead at me when he said it. It gave me chills.

And it fuels frustration with an era when so many seem hellbent on forgetting, on spurning the lessons for which Joe and so many more paid so dearly. The Nazis systematically murdered 11 million people — 6 million of them Jews, the rest homosexuals, communists, labor unionists, Jehovah’s Witnesses, the disabled — for the “crime” of worshiping, thinking or being, different. That’s a Sept. 11 attack every day for 10 years.

As Joe said, “We survivors thought, after the war, there’s no more wars. That’s the end of everything. But you can see now what’s going on. People still killing people and everything. Things didn’t change.”

We were at Auschwitz when he said that. I recall feeling that we — the generations after his — had let his generation down. The feeling has only intensified in the years since, as Jewish cemeteries are vandalized, as synagogues are attacked, as a pop star spews anti-Semitic bile, as migrants are caged and their children taken, as a church in Joe’s hometown endures a racial massacre, as hate crimes rise, as states restrict the remembrance of atrocities and as some of us pretend all of this isn’t what it is.

Joe’s frustration at what did not change stays with me. As does his belief in the importance of telling the story anyhow. But above all, I can’t escape a conviction that we owed him — we owed all of them — much better than this.

And that we still do.