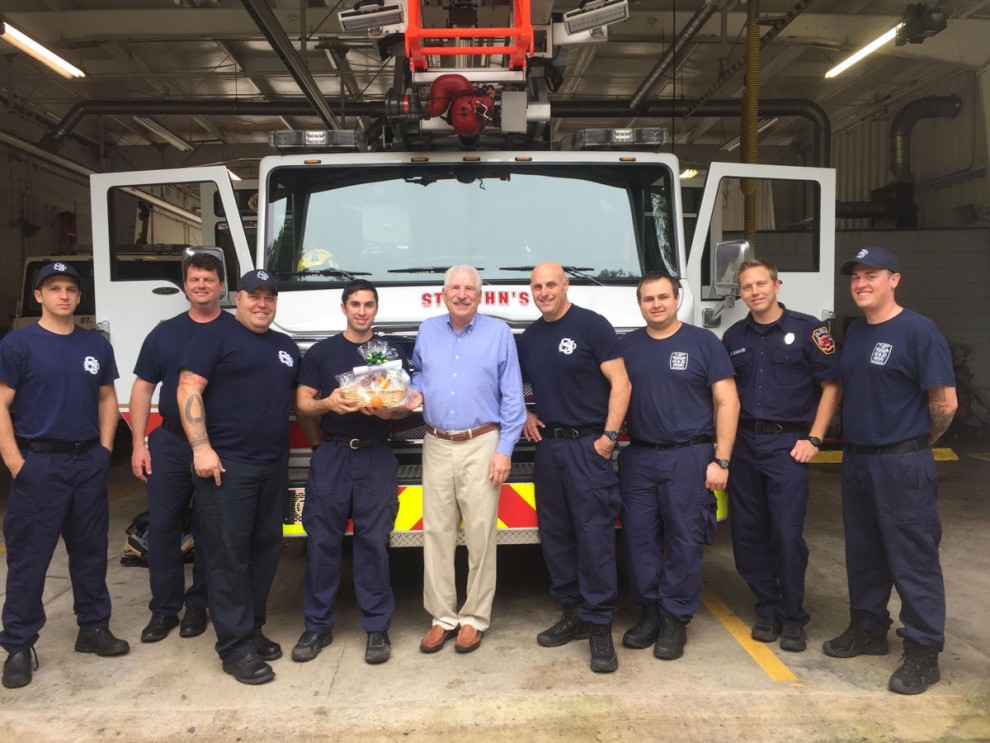 This article orginally appeared in the Post and Courier on December 23, 2017 here: https://www.postandcourier.com/features/jewish-santas-deliver-goodies-to-first-responders/article_8c74c2b2-e5a1-11e7-830d-db5157f915d9.html?utm_medium=social&utm_source=facebook&utm_campaign=user-share

By Adam Parker aparker@postandcourier.com
Pictures:  Neil Gewirtzman (center) with firefighters of the St. Paul's station on Seabrook Island last year. Gewirtzman in one of many Jewish volunteers who deliver food to first responders on Christmas Day.

The initiative — the First Responders Project — is coordinated by Charleston Jewish Family Services and the Charleston Jewish Federation, which sign up dozens of volunteers to bring food to fire stations and police departments throughout the tri-county metropolitan area on Christmas Day. It’s a way for members of the Jewish community to express their appreciation for first responders who must work on the holiday.

“The first year we reached about 20 different stations,” said lead organizer Sara Chesley. Initially, volunteers visited only fire houses. “This year there’s 40-plus.” And they will include police.

Some volunteers cook hot meals, others prepare sandwiches. Some bake or buy sweets. They sign up with Chesley, who makes assignments, seeking to spread the good cheer far and wide.

“A lot of us are looking for things to do besides Chinese food and a movie,” she said. “You can drop off your cookies on the way to the movie.”

She said perhaps 50 people will register to participate in the First Responders Project, but they often get their families involved, so the real number of volunteers can exceed 100.

“A lot of people want to bring their children, because how fun is it to go to a fire station?” she said. “Some form teams and treat it as an event, so it’s really taken on special meaning for families.”

Chesley said the project is one way to realize the Jewish moral imperative of “tikkun olam,” which translates to “repairing the world.” It has come to connote social outreach and charity, but its meaning is deeper than that. It has its origins in the Kabbalah, a mystical Jewish text.

Tikkun olam refers to the divide between the holy and materialistic, the perfection of God and the brokenness of human kind. It includes notions of good and evil, and of the spiritual quest to achieve wholeness so that God’s divine light, currently scattered, might shine its brightest.

To do this, Jews worship together to emphasize the sacred over the profane, and they do good deeds in an effort to gather together the shards of holy light, little by little, over the ages.

Charleston’s interim fire chief John Tippett said the department is overwhelmed by the generosity of area residents and is very grateful. The gesture is especially meaningful because of the large number of people working on Christmas Day.

“All of our stations are fully staffed with firefighters every day of the year,” he said.

Neil Gewirtzman, a Kiawah Island resident, is one of the growing number of volunteers. Last year, he made a point of taking photos with the firefighters.

“People saw the pictures and thought, ‘How great is that?’ So more people got involved,” Gewirtzman said.

He and his wife Marsha are preparing baskets of goodies to bring to four stations on Christmas Day this year, he said.

“Somebody’s doing the work and protecting,” he said. “We just wanted to thank them.”