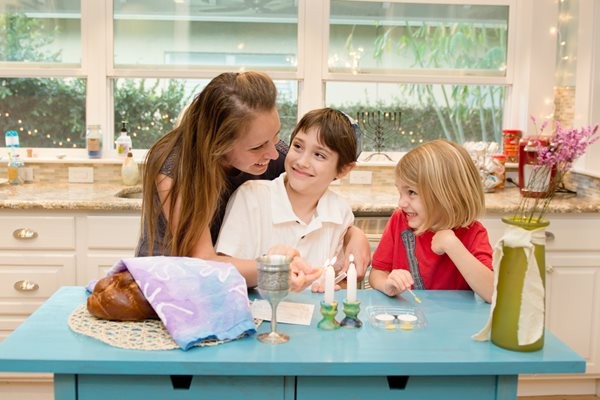 This week, communities across the globe will be celebrating The International Shabbos Project. Initiated in South Africa by Chief Rabbi Warren Goldstein, the idea was started with the goal of  encouraging Jews from across affiliations to keep one Shabbat, or Shabbos, together. Perhaps with the constant pull of electronics, most of South Africa’s Jews - most of whom are not observant, found appeal in the concept of keeping a whole Shabbos. And while in the beginning, many found the idea of keeping a whole Shabbos merely intriguing, by the actual event, 90 percent of South Africa’s Jews participated in the initiative.

Pictures of the mega challah bake with hundreds of women baking challah together in the streets of Johannesburg brought chills and tears to the eyes of anyone who saw them. There were reports of people eating Shabbos meals together, with some meals even numbering hundreds. At the conclusion of this special Shabbos, the South African community came together for a massive Havdala (ceremony signifying the end of Shabbos) with thousands of attendees. When questioned afterward, the resounding answer among people who had kept Shabbos for the first time, some of whom included celebrities, was “this was our first Shabbos, definitely not our last”.

And with the success of the Shabbos Project in South Africa, it became an international yearly initiative across the globe.

Last year, many will remember that our community united for our first Mega Challah Bake, a beautiful event that took place during the weekend of the Shabbos Project, bringing together two hundred Jewish women to bake challah.

This year, we are trying something different.

For many of us, one of our fondest Jewish memories, is that of our grandmothers lighting Shabbos candles, bringing a sense of peace and spirituality into the home. For whatever reason- maybe because we have become so busy or maybe because of assimilation, many Jewish families women no longer light Shabbos candles.

This week, Jewish organizations across Charleston are daring to try something tremendous: to try to encourage every Jewish household to light Shabbos candles in honor of the Shabbos Project.

While the idea of trying a whole Shabbos is intriguing but perhaps intimidating, it is not a big feat to light Shabbos candles. It can be done with your grandmother’s silver candlesticks or two tea lights purchased at the store. It can be done in the comfort of your own home or with friends and requires very little money or time. And yet, it is an act that the Talmud teaches is meant to bring Shalom Bayit, tranquility and peace into the home. In our busy lives, who doesn’t need a moment of peace? Who doesn’t need a moment to connect with our Jewish heritage, a moment to reflect on our lives and a moment to feel gratitude for all that we have and pray for that which we need?

But more than anything, candlelighting is the connection between our heritage and our future. I want to share the following story that I read in Rabbi Dov Weller’s book, the Eishes Chayil Candlelighting Treasury:

In the late 1990’s a Jewish organization approached a Jewish philanthropist with the following idea. They wondered if the time for candlelighting was included on a box on the front page of the New York Times, maybe more Jewish women would be reminded to light Shabbos candles. The philanthropist agreed to sponsor the $2,000 a week ticker and for five years, the candlelighting time appeared on the front page of the New York Times. But it was an expensive endeavor and after those five years, the philanthropist decided he could no longer afford to keep paying for this ad and the ticker disappeared. But it would appear once more.

On January 1st, 2000, the New York Times decided to celebrate the new millennium by printing three editions of the newspaper. The first was dated January 1, 2000- that day’s news. The second edition was dated January 1, 1900, the newspaper edition from a hundred years before, to show how far the world had come. And lastly, they created an edition dated January 1, 2100, in which they used their imagination to describe what the world might look like in a hundred years. Among the articles about flying cars and cures for obscure diseases was a ticker with that week’s Shabbos candlelighting time. When the production manager, an Irish Catholic man, was asked why he decided to include the ticker in this issue,  this is what he said: “No one knows what the world will be like in the year 2100. We cannot predict the future, but one can thing we can be assured of, and that is that on Friday afternoon, January 1, 2100, Jewish women will be lighting the Shabbos candles.

And so I issue this request to all of the Jewish households in the greater Charleston area: please join us and light Shabbos candles, this Friday, October 27th, anytime from 5:45pm-6:15pm and bring the beautiful light of Shabbos into your homes. Imagine how powerful it could be if all of us Jews, no matter how different we may be, can unite for this one purpose, connect with the traditions of our grandmothers and experience this moment of tranquility as a community?

Ariela Davis is the Director of Judaics at Addlestone Hebrew Academy and Rebbetzin of Brith Sholom Beth Israel Synagogue.