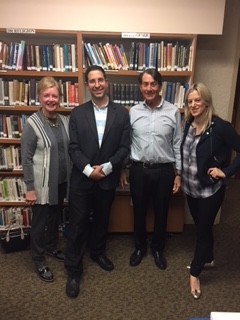 On Thursday, October 26th, the Jewish National Fund (JNF) brought Gil Hoffman to Charleston, to speak at Synagogue Emanu-El. As the Jerusalem Post’s political correspondent and the author of its Frontlines column, Gil Hoffman provided a behind-the-scenes look at the intrigue and humor of Israeli politics. He regularly appears on television for CNN, Al-Jazeera, and other news outlets, and has lectured in every major English-speaking country.

“Most Israeli speakers just go to the big Jewish communities in New York, Los Angeles, Chicago and South Florida,” says Hoffman. “I have made it a point to reach out to smaller communities and inform them about what is going on behind the scenes in Israel.”

Earlier this year, JNF also brought Rebecca Shimoni-Stoil, Washington Correspondent for The Times of Israel and a Ph.D. candidate at Johns Hopkins University to Charleston, where she addressed nearly 100 people at Synagogue Emanu-El's Shabbat dinner.

"We are so pleased to bring esteemed and seasoned speakers to Charleston such as Gil Hoffman and Rebecca Shimoni-Stoil," noted Kate Samuels, Director of the Southeast for JNF. "JNF is your voice in Israel, making an imprint on every member of Israel’s society. Our Blueprint Negev campaign has transformed Israel’s Negev Desert, making it an attractive place to live and work. Similarly, our Go North initiative has begun to provide new economic development opportunities to grow tourism, increase employment, and offer educational and housing options, making Israel’s north a desirable place to both visit and live."