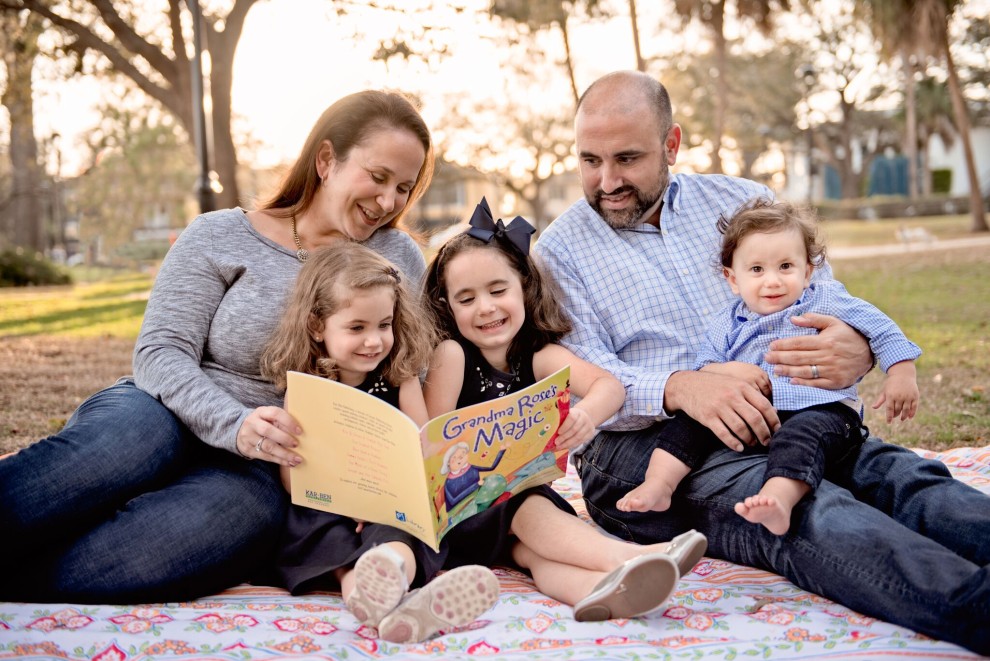 Across the U.S. and Canada, PJ Library® strengthens Jewish engagement of interfaith families

CHARLESTON, SC – A Jewish children’s book program is helping to preserve the richness and vibrancy of Jewish culture, one book at a time. Like families across the United States and Canada, Charleston area families who participate in PJ Library say the program has influenced or supported how they talk about and practice Jewish traditions in their home. 92 percent of local families say PJ Library helps them have conversations about Jewish traditions, values and customs with their children.

PJ Library, the flagship program of the Harold Grinspoon Foundation, delivers more than 170,000 free Jewish children’s books and music CDs throughout the United States and Canada each month, including 369 children currently in the Greater Charleston area, and 757 since the program began in Charleston. Books are sent to children ages six months through eleven years, with each subscriber receiving a title carefully selected for high-quality content and age-level appropriateness.

"Charleston Jewish Federation is so grateful to our local donors for making the PJ Library Program possible, helping CJF to fulfill our mission to help every Jewish family find a meaningful Jewish path on their own terms," said Judi Corsaro, CEO of Charleston Jewish Federation, which partners with the Harold Grinspoon Foundation to ensure children in the Charleston area receive PJ Library books as a part of the program.

“Working to preserve a strong Jewish community for future generations is at the heart of everything we do at the Foundation and through PJ Library,” said Harold Grinspoon, the founder of PJ Library. “Books are a natural way to invite people into a global community and to pass values and traditions onto the next generation, ensuring our children and their children grow up connected to their Jewish heritage.”

PJ Library also provides participants the opportunity to connect with other families in their community through events for younger children. In Charleston, 61 percent of PJ Library families surveyed attended events for Jewish families with young children hosted by PJ Library or another organization in the past year. The events, which families say they usually attended a few times a year, included chances to socialize and participate in arts and crafts, cooking or book readings. 84 percent of the parents who went to these events say they connected socially with other adults they met.

One of PJ Library’s ongoing programs is Shalom Baby. A co-sponsorship with Charleston Jewish Family Services, Shalom Baby helps Jewish families in the Charleston area celebrate the birth or adoption of their babies and welcome them to the Jewish community. “Our experience with Shalom Baby has been magical.  On the practical side I look forward to playgroup each month. My tiny little boy gets to interact and play with other babies,” says Alexa GaItman, PJ Library parent. “I get to regain some sanity and kvetch with other moms and dads. I was given access to a community that I love that my family gets to be a part of. But it’s been more than that. For the first time since moving to Charleston I feel like I’m building a community I want to be a part of and i want my family to be a part of. It’s a bonus that they understand the epicness of Purim or how absolutely frustrating explaining to someone no you don’t celebrate Christmas for the 1000th time is. Without Shalom baby I don’t know if we would have found that.”

In addition to creating connections between families, PJ Library is fostering communal ties, with 92 percent of all participating families in the Charleston area saying the program has made them interested in getting more connected to local Jewish activities, organizations, and/or people.

“We take seriously that each night parents are inviting us to join their family during one of the day’s most treasured moments before bedtime,” said Winnie Sandler Grinspoon, president of the Harold Grinspoon Foundation. “We take our cues from parents to make sure we provide books worthy of that special family time. Parents have told us that the PJ Library books their families receive each month not only help them feel more capable of raising Jewish children, but also make them more excited to pass on the traditions and beliefs they cherished in their own childhoods or have come to cherish as adults.”

To ensure parents feel equipped to talk with their children about Jewish values and traditions, PJ Library includes information for parents on the inside flaps of each book, suggests tips and resources for parents on its blog, and gives parents the opportunity to choose their own book each year. 90 percent of Charleston area families who participate in PJ Library say the program is a valuable parenting tool, and 89 percent say it has helped them think about the kind of Jewish practice they want to have in their home.

Since its founding in western Massachusetts in 2005, PJ Library has rapidly grown to send more than 170,000 free Jewish books per month to more than 125,000 families living in 200 communities across the United States and Canada. Combined, PJ Library and its sister program Sifriyat Pijama in Israel deliver more than 540,000 free books each month to young children in 13 countries, and PJ Library recently expanded its offerings to provide books to older children ages eight-and-a-half to 11 in the United States through the PJ Our Way™ program.

The 2016 Triennial Family Study, conducted in partnership with external evaluation firm Informing Change, consisted of an online survey and had a 20 percent response rate with 25,270 responses. Forty-five families participated in additional telephone interviews.

Charleston PJ Library is an investment in our Jewish future and is made possible through the generous support of local donors, including:    Linda and David Cohen Ellen and Harry Nadler Herb Rosner Gina and Sam Shapiro, in honor of Freddie and Milton Kronsberg (OBM) Sandra and Howard Peskin Julie and Stephen Ziff  Anita Zucker​

The Charleston Jewish Federation safeguards a point of entry for a Jewish person at every stage of life by supporting the Jewish organizations and agencies that fulfill this mission. By promoting Jewish peoplehood, CJF makes sure that no matter where you go, there will be a community for you.

About The Harold Grinspoon

The Harold Grinspoon Foundation operates creative programs to engage the Jewish community by meeting people where they are at key life moments and by providing access to the best of Jewish culture and tradition, while using philanthropy to encourage others to invest in the Jewish community.

PJ Library® is an award-winning program started by the Harold Grinspoon Foundation that engages families in their Jewish journey by giving free Jewish books and music to children ages 0-11. PJ Library has partnerships with philanthropists and local Jewish organizations in over 200 communities in the U.S. and Canada and sends books to families around the world.