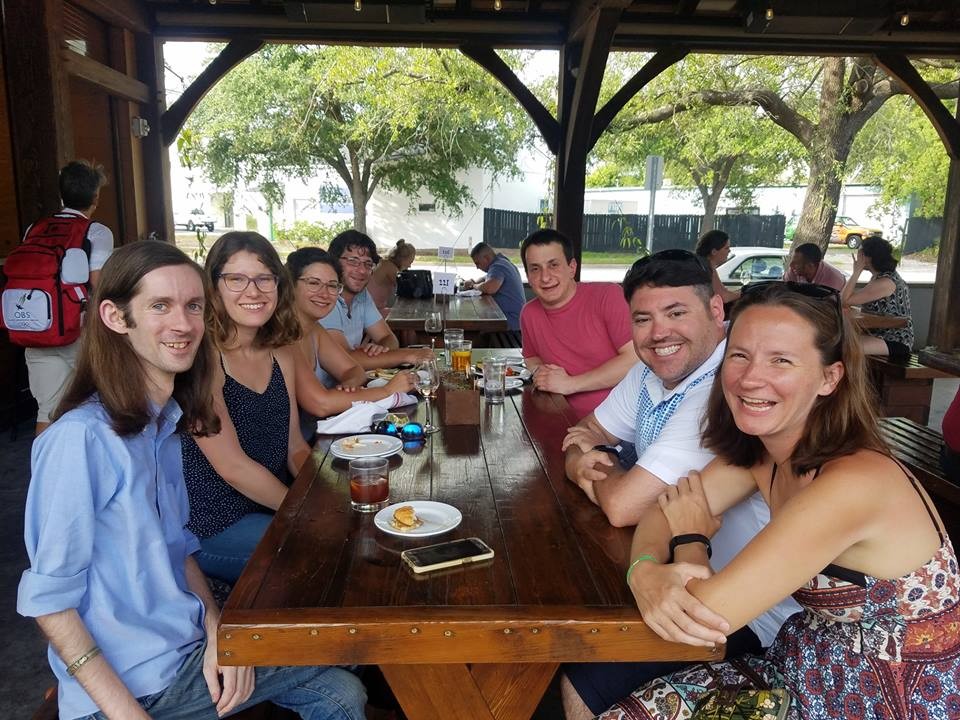 Adrian Barry is a member of our YAD (Young Adult Division) Advisory Council. YAD Advisory Council members plan regular social, community service and Jewish events for young adults. They also serve as a welcoming committee for newcomers to the community. This council is a unique leadership development and career-building opportunity, available for a selected group of young Jewish professionals residing in the Charleston area, designed to recruit, engage, and enhance the Jewish experience of members of CJF’s Young Adult Division (YAD).

With a name like Adrian Barry--so goy it once caused a pair of Rabbis to double-take during live TV--I'm not exactly what you picture when you conjure up an image of a Jewish Federation Advisory Council.  Aside from the name, I don't have the background, I wasn't Bar Mitzvah'd, I don't observe--nor was I even taught--the faith, and I have what I imagine are some fairly unpopular views on Israeli policy.  Not an ideal situation!  I didn't even find out I had Jewish heritage until I was in college, when my mother started doing genealogical research on her side of the family and discovered that she was part of a matrilineal line, long hidden, that goes back as far as we can find record.  What I remember most clearly from this discovery was the sense of excitement--the idea that it all made sense.  While I hadn't been raised Jewish, nor had my mother, she was raised in the Jewish neighborhood of a German town in post-war New Jersey.  Most of her earliest friends were Jewish, many the children of Survivors who were her neighbors.  She was heavily influenced by this community, with its rich cultural traditions being closely guarded and hard-won in those early post-war years  As she got older and became an avid reader she saturated herself in Jewish history and literature.  As a result, my sister and I were raised with an affinity for Jewish culture--beyond the militant devotion to a proper bagel that is of course embedded into any good northern New Jersey native's DNA.

Having moved to Charleston for college, a town with deep Jewish historical roots and on a campus with a nationally recognized Jewish outreach and retention program, and staying on here for ten years now, I've had time to explore the community at various levels and in multiple capacities.  First in fits and bursts, testing the waters to see if there was a place someone with my background could play a role, or using as a buffer my position on campus in organizing events for the student body.  And more recently diving in head-first, as a YAD Advisory Council member, organizing and leading Jewish events for Jewish youth.  I was less concerned with being unwelcome than I was with feeling myself like an negative influence.  With a background in social justice movements and theory, I'm more than normally familiar with issues like oppression tourism, and that concern weighed heavily on me.  What YAD has given me is freedom from those concerns, which even quite recently were still a factor.

YAD offers unconditional space within a vibrant, enthusiastic community for even the most hesitant and uncertain of us.  Such care and intention is put into events to be sure that there is something for everyone.  You may not come to all the events, but at any given time you'll be no more than a few weeks away from an event that fits your needs and interests.  Feeling socially awkward?  There's the monthly trivia night, where you can show up at a clearly defined time with a clearly defined purpose--no pressure!  Want to explore the rituals of faith with your judgement free peers?  We've got everything from monthly Shabbat potlucks to the High Holy Day observances to be your more casual bridge as you explore.  Beach days, Riverdogs nights, athletic leagues, civic engagement, discussion groups--an ongoing roster of events so rich in their diversity of content and multiplicity of format that they ensure even the most cautious or unsure of us has a role they can fill, and a space they can fit into.

Without YAD, I'm certain I would have remained on the periphery, concerned about my place and where I'd fit in.  YAD is a community that yearns for the broadest possible inclusion.  One that actively seeks out those like me that are on the periphery in order not to co-opt or assimilate them, but to show them that, though they may not realize it, they're already a part of this community, and that they can engage within it on their own terms.  There is no question of fitting in when the goal is the empowering of diversity--diversity of experience, diversity of background, and diversity of opinion.  All come together to build the community that YAD is here to highlight and develop.