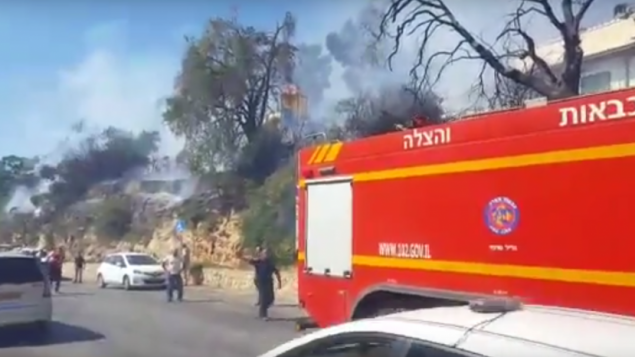 This Sunday (July 16) a wild brushfire swept through the Canaan neighborhood in the northern city of Tzfat, fueled by exceptionally hot, dry weather. Hundreds of individuals and families were evacuated from their homes, some of which sustained irreparable damage and will need to be entirely rebuilt.

Federation's overseas partner The Jewish Agency for Israel responded swiftly and immediately. In coordination with the municipality of Tzfat, temporary housing has been made available for evacuees in a local Jewish Agency absorption center.

Federations are also helping to provide financial support to the affected families. In November 2016, Federation partnered with the Jewish Agency and others to establish The Israel Fires Emergency Fund (based on the model of The Jewish Agency’s Fund for the Victims of Terror), which supported the victims of the fires that ravaged homes and land across several areas of Israel at that time. Within days, The Jewish Agency activated its emergency protocol and began distributing grants to individuals and families affected by the fires. These emergency grants were provided to 627 households, which enabled victims to immediately purchase food, clothing, and other basic necessities.

JFNA has utilized a small amount of the balance to provide relief to 14 households ($1,000 per household), whose homes were entirely destroyed and/or deemed unlivable for the foreseeable future. This monetary grant is meant to assist these families with their immediate needs; to be able to purchase clothing, food, medicine and other basic necessities, which during these first few days can make a difference and give some hope to the vulnerable Israelis whose lives have been turned upside-down by the fire in Tzfat.

To read more about the fire in Tzfat and see a short video of The Magen David Adom ambulance service evacuating residents, click here.