Earlier this week we celebrated  Tu B'Av – the Jewish Day of Love! In the spirit of the holiday, we took some time to reminisce about the impact that one of our community initiatives - the Young Adult Division (YAD) - has in bringing people together.

Geared for our community members in their 20's and 30's, YAD offers young Jewish singles, couples, families and new area residents a broad range of social, educational and volunteer opportunities. This community initiative provides them with a social or professional network with other young Jews in the Charleston area and encourages participation in the Charleston Jewish community. YAD welcomes those who would like to connect with the Jewish community and encourages participation of interfaith families, couples and significant others in all its activities.

The reality of COVID-19 has certainly created challenges to the in-person gatherings that our YAD community is used to, but they are up for the challenge, pivoting to find ways to continue to build community.

Our YADdies, as we like to call them, make a difference each day in our community by participating in the annual community campaign, volunteering for a variety of causes and as members of our organizations' boards. With so many YADdies stepping up to support Jewish life in Charleston, the future is bright!

While finding your bashert (loved one) is not an express goal of participating in YAD, it happens! You can read stories of some of our YAD couples here. 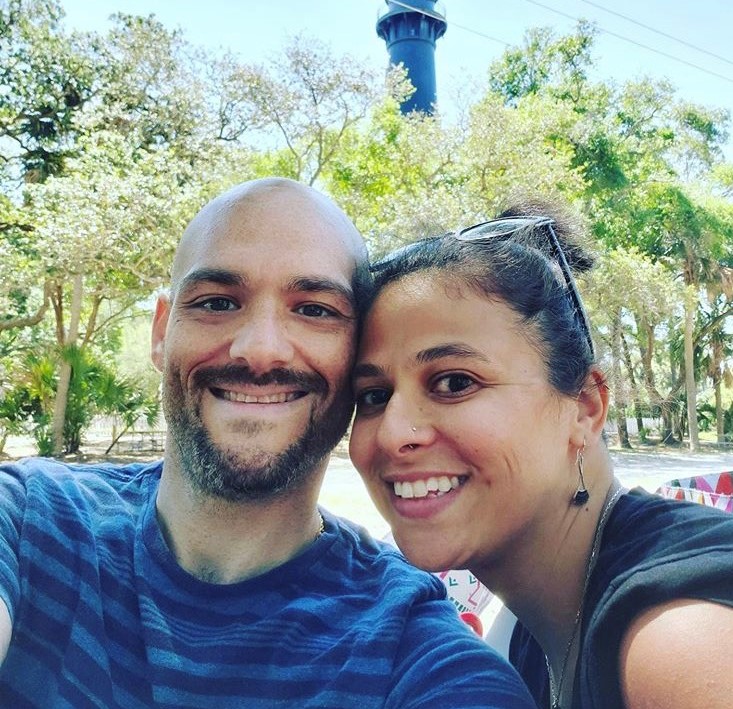 When did you first meet?

Natanya: I don't remember that. I do remember a trivia and bar hopping after Chanukkah in the Square 2011.

We both remember a NYE party that year.  We started emailing the next day, and a week later went out on our first date.

What drew you to YAD In the first place?

Natanya - my sister told me to join when I moved to Charleston so I would make friends. Who knew I would meet some of my closest friends and my partner!

Alex - I joined sometime after college because two friends encouraged me to check it out. I was a member of AEP in college and wanted to maintain a Jewish community connection, similar to what the fraternity and Hillel provided in college.

What's up next for you and your spouse? Alex will graduate from nursing school in December (woohoo!). Pre-Covid we would have said travel, now, who knows, probably some more baking and home improvement projects... we shall see where the road takes us (but in the meantime, wear a mask, stay home as much as possible, wash your hands, use sanitizer and VOTE!) 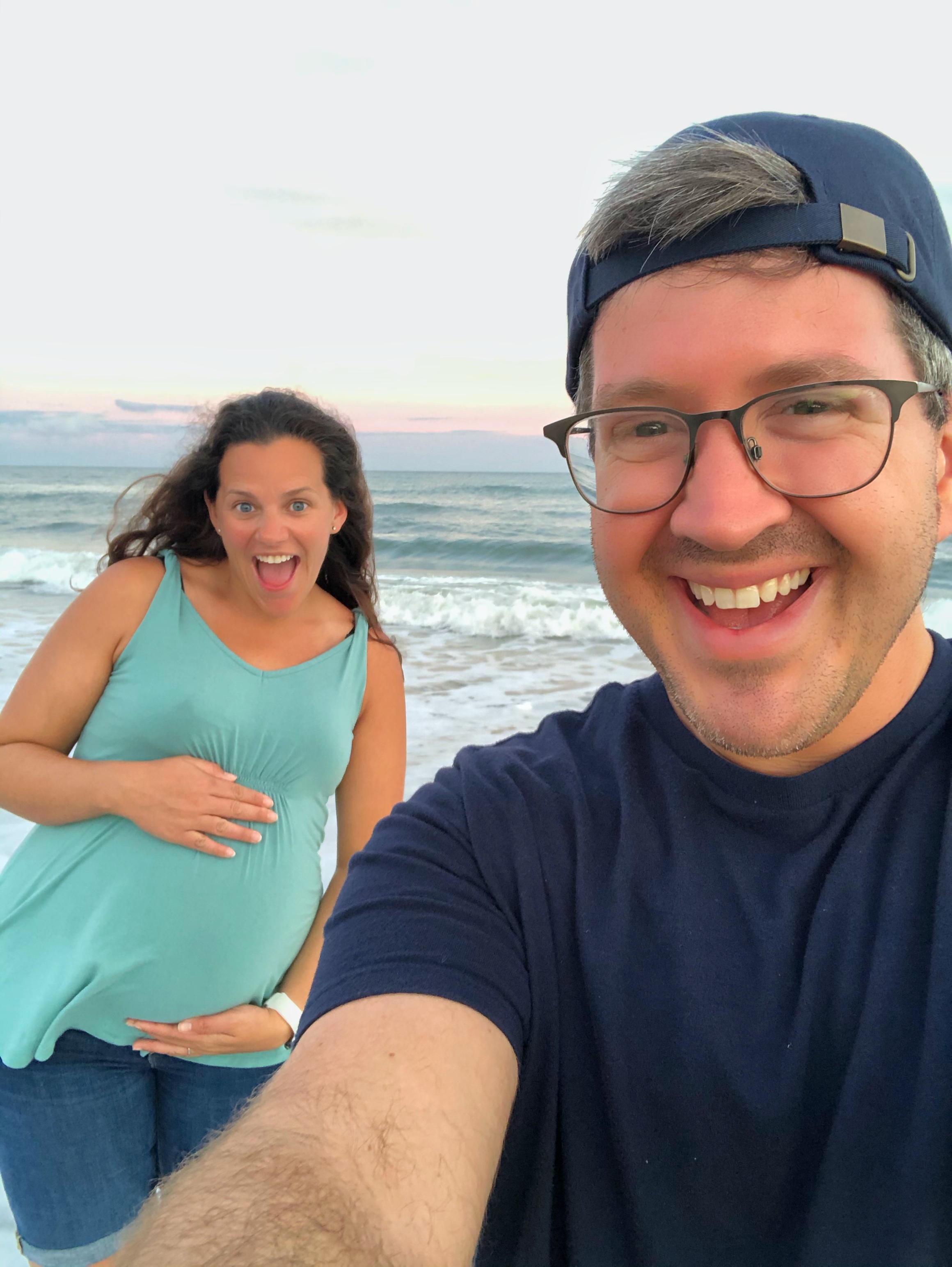 When did you first meet? We first met in 2012 through a mutual friend and fellow YADdie, Sarah Myer, who was celebrating a birthday with Charleston friends at a cabin in Asheville. Ellen was living outside of Asheville at the time, working for the Flat Rock Playhouse, and met the group for dinner. We sat across from each other, but had no idea then what the future held for us. YAD actually does get credit for our first true connection, at a YAD Singles Shabbat hosted by Rachel Hershenberg. We were both among the only people the other knew at the dinner, and at one point, Mark remembers (distinctly!) that Ellen asked for help with a button on her dress. Sparks flew! A long first date over chips and margs at Yo Burrito (on Wentworth, RIP) took place a short time later, and the rest is history. We were engaged in 2015, married in 2017, and are expecting our first child in September (b'shaah tovah).

What drew you to YAD In the first place? Jewish community has been important to both of us throughout our lives. We were each deeply involved with our home synagogues, Heska Emunah in Knoxville, TN (Ellen) and Temple Sinai in Washington, DC (Mark) and in youth groups in High School. Establishing Jewish roots in Charleston was a no-brainer, and YAD was a wonderful venue through which to grow our local network of friends. Happily, that is exactly what happened.

When did you get married? We were married on May 14, 2017 (Lag Ba'Omer) at Alhambra Hall in Old Village, Mt. Pleasant. Our dear friend and former KKBE Assistant Rabbi Andrew Terkel officiated, surrounded by friends and loved ones, including a number of YADdies. It was an amazing day, but we have loved married life much more than we enjoyed planning a wedding!

What's up next for you and your spouse? Mark recently switched jobs, having spent eight years with the Jewish Historical Society of South Carolina and the Yaschik/Arnold Jewish Studies Program at CofC -- where Ellen manages the Costume Shop and teaches Costume Construction -- to become Executive Director at Charleston's historic Reform congregation, KKBE, where we also belong as members. With a baby due in the next few weeks, that is plenty of changes for us, thank you very much! 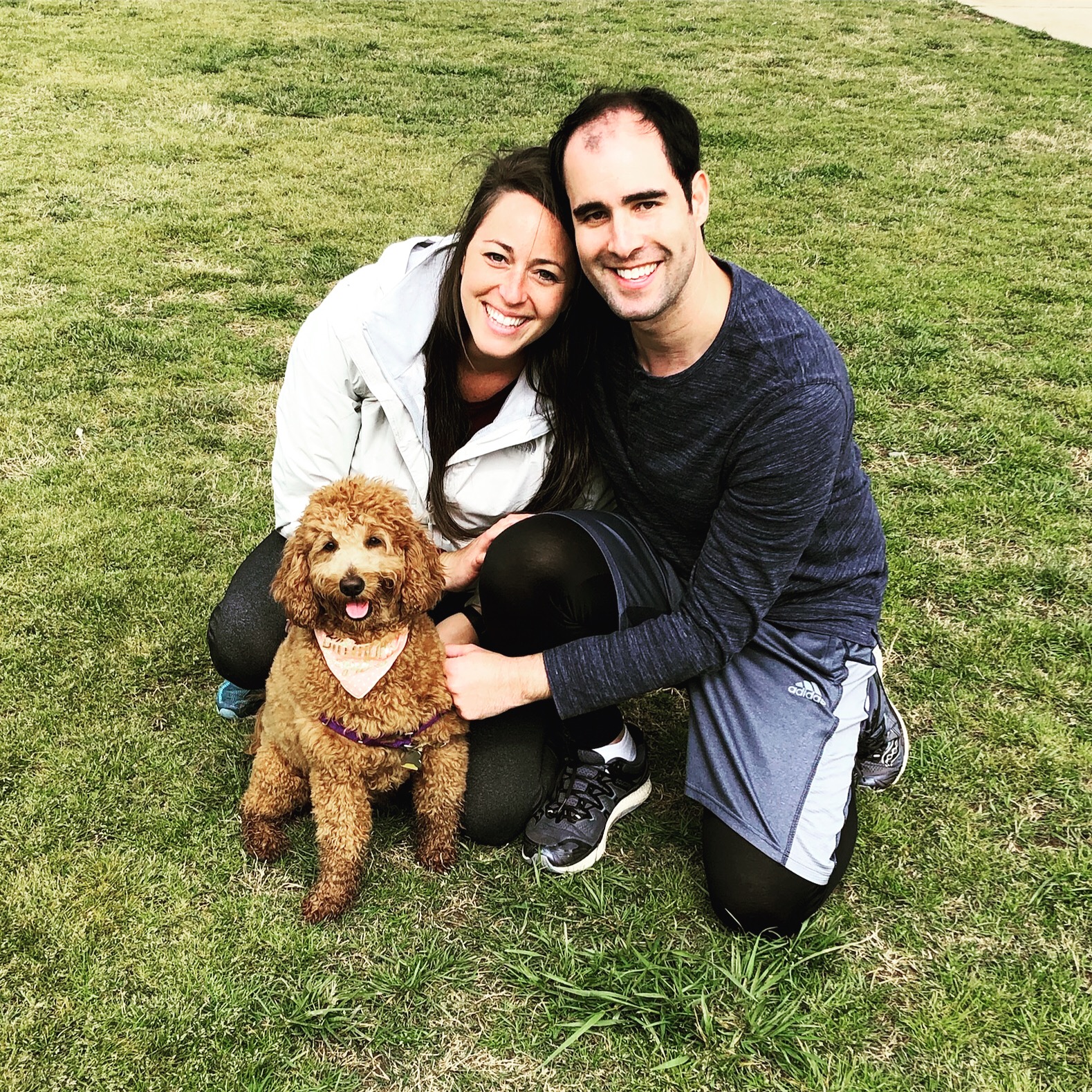 When did you first meet? We first met through Charleston YAD at a group outing to the Coastal Carolina Fair in November of 2014. But it feels like just yesterday!

What drew you to YAD In the first place? Making Jewish friends in the local community was really important to both of us individually. When it comes to feeling like you are a part of community, there really isn’t anything else quite like the cultural bond you have with fellow Jewish friends. Additionally, the social aspect in being able to be a part of a community was appealing. YAD was also a great connector to ensure that we had a place to go for the high holy days, Shabbat dinners, and other religious events.

What's up next for you and your spouse? Now that COVID has taken the world by storm, there is no travel in our cards in the near future. However, we are excitingly close to Jenna graduating with her Masters in Speech-Language Pathology this December! Joseph has been enjoying his work for a San Francisco-based health and wellness software company for the past two years. We are also enjoying settling into our new home that we bought one year ago this month!

Anything we missed? Our two-year-old puppy, Little Debbie, is the sweetest dog you will ever meet. When she isn’t busy baking up sweet treats, she enjoys giving lots of kisses to anyone she meets! 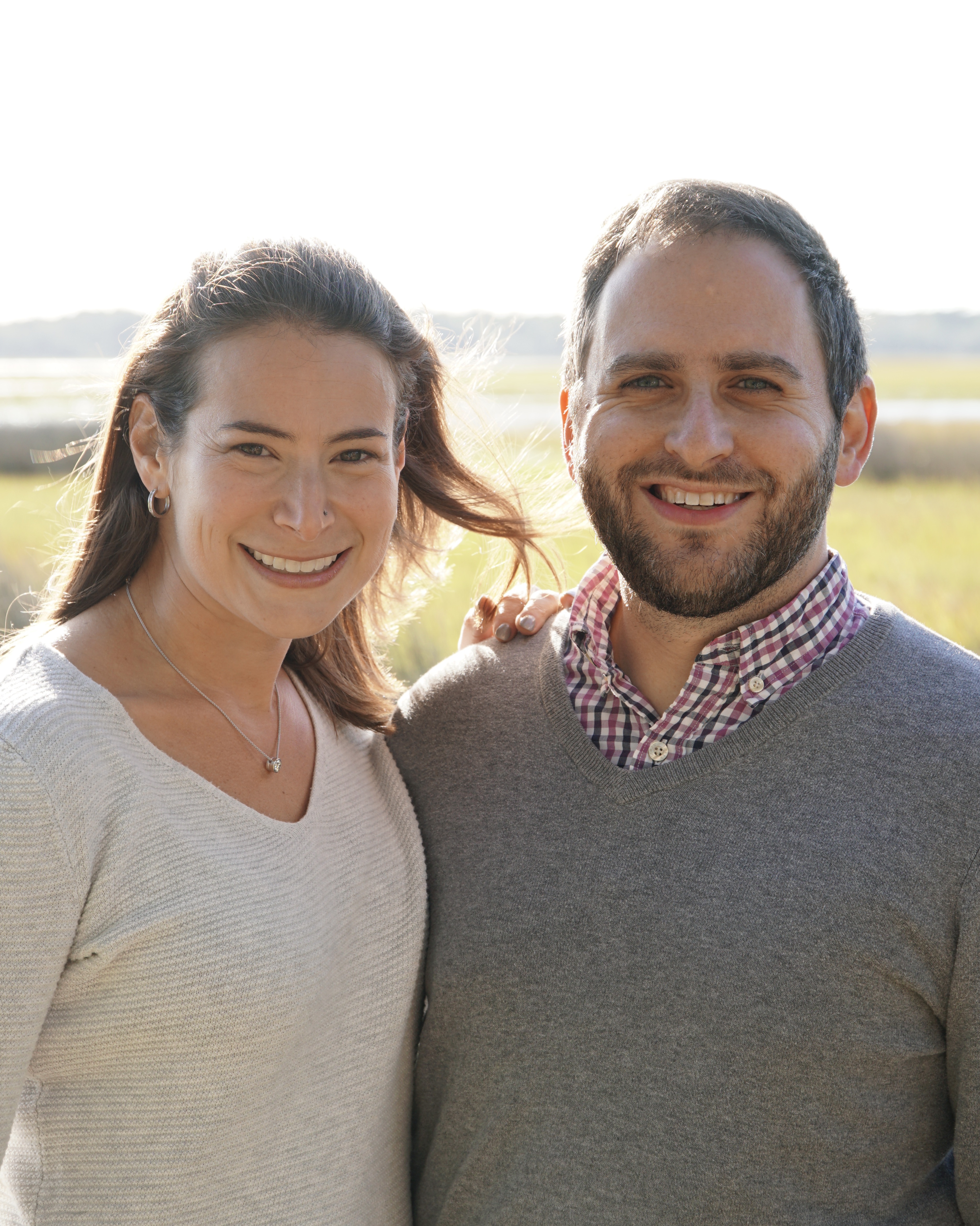 When did you first meet? We met first at happy hour at Social, an awesome wine bar that used to exist on East Bay Street. We were out with different groups but ended up merging into one big group due to a mutual friend. Sarah was sitting at the table already with a bunch of girls, and David arrived with (more) girls - the only guy in the group. Another mutual friend introduced David to the table as "This is David Myer - he's Jewish, and SINGLE". He sat at the opposite end of the table and was otherwise innocuous and of no interest to Sarah until she mentioned that she was growing Thai Basil. David basically yelled across the table to assert his interest in the topic to get her attention. It didn't work - we left that night without exchanging information.  2 weeks later we ran into each other again at Club Habana (another Charleston institution gone too soon) and Sarah tried to sell everyone the last 2 tickets to the YAD Tu B'Av boat cruise - David agreed just to see Sarah again. From there, our relationship grew into a friendship and then more.

What drew you to YAD In the first place? Sarah started attending YAD in her senior year at CofC, knowing she was staying in Charleston for the long haul. She got involved first as an attendee but quickly started organizing events. David moved to Charleston with no social network but despite that, didn't get involved in YAD until he noticed Sarah went to a bunch of stuff ;-)

When did you get married? We got married in fall 2013 and had our son Jake in fall 2016. We have 2 fur babies - Benson (Sarah's dog) and Greta (technically David's dog - much to his chagrin). We went on Birthright together in summer 2018 as a part of Birthright Israel's pilot program to expand the age to 32!

What's up next for you and your spouse? We want to make it through this pandemic, but are using this time to find silver linings and re-evaluate priorities as a family. We're also looking forward to a trip to Seattle to visit grandparents, apple picking near Asheville in the fall and a much needed getaway for Sarah with childhood BFFs. 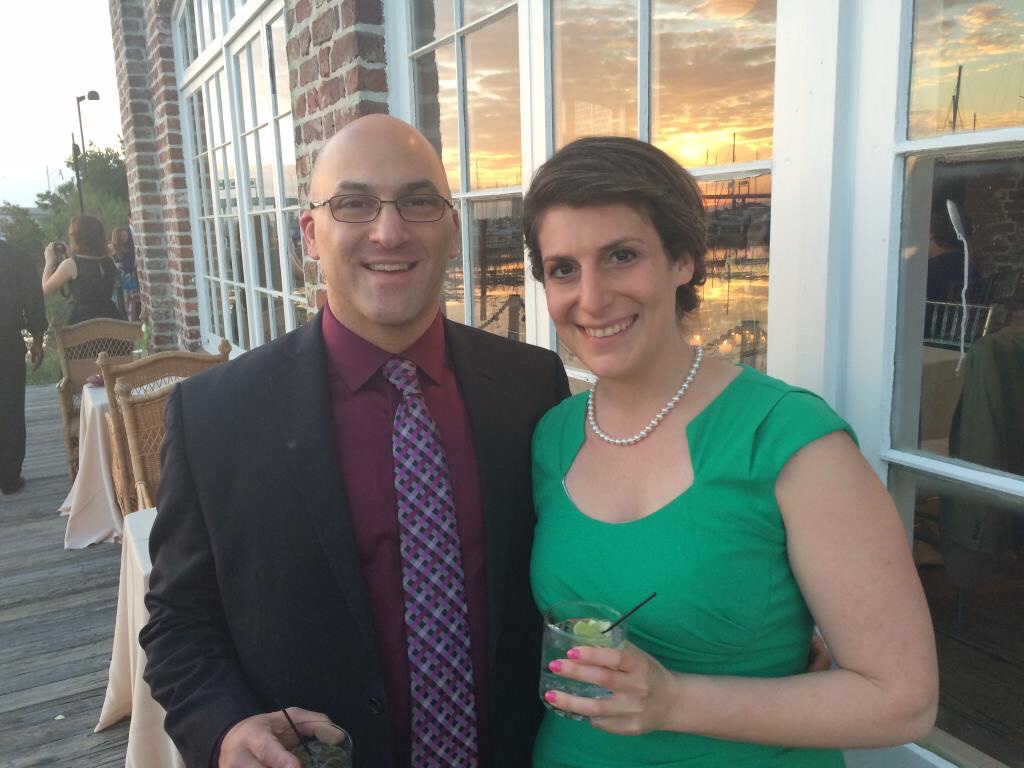 When did you first meet?Rebecca was a new young professional at the Charleston Jewish Federation and Aaron, a YAD member, was also on the Federation board. Rebecca knocked on his door to help him set up for a YAD Shabbat dinner he would be hosting later that evening. It was like at first sight. When Rebecca shared with Aaron that she was nervous that the number of people who had confirmed they were coming far exceeded the space in his home, Aaron said, "we will do what we always do for family - we make room." Rebecca knew Aaron was a special person who would prioritize family and community, and she never looked back.

What drew you to YAD In the first place? We both found YAD in different years, but the trend was the same - as newcomers to Charleston, we were looking for community, and YAD was a welcoming space. We have many friends that we have met through YAD who are still a significant part of our lives today.

When did you get married? Our relationship progressed pretty rapidly; met in January 2015, engaged by September of that same year, married 7 months later, and welcomed our first child in February 2018.

What's up next for you and your spouse? Our daughter Edie will G-d willing become a sister in early 2021! And we owe it all to YAD!