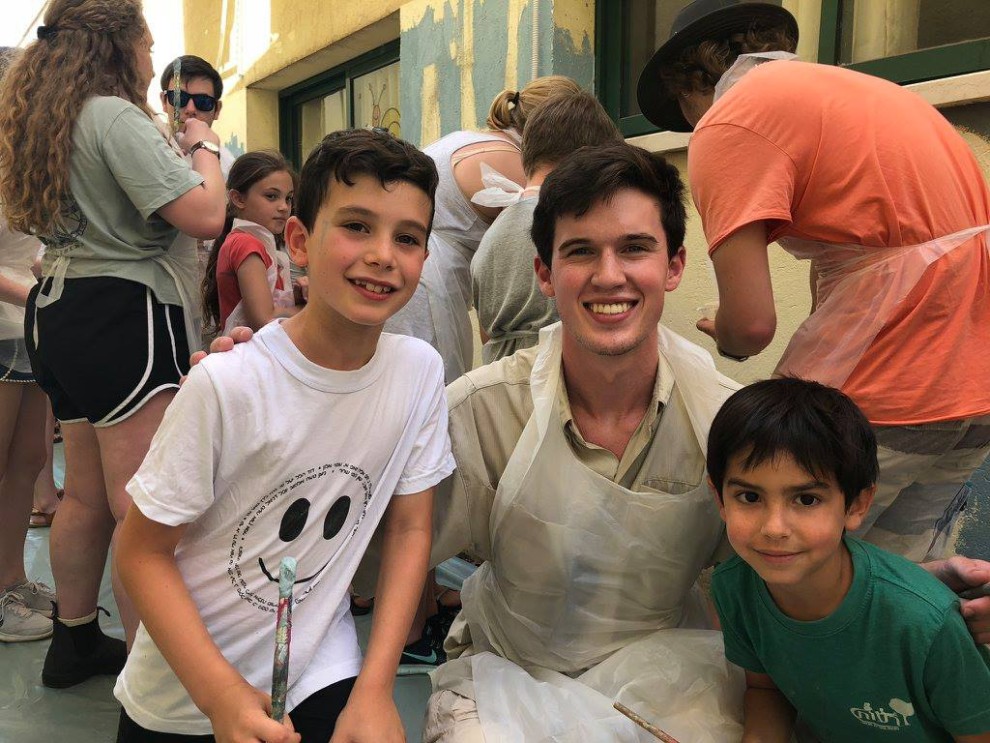 This summer, students from College of Charleston and across the U.S. traveled to Israel on the CofC Birthright trip. We wanted to add a personal touch to this trip by stopping in Charleston’s sister city, Hadera, located in northern Israel. Because Birthright is only meant to give participants a “taste of Israel”, Hadera is not included in a typical itinerary. However, Israel Outdoors, the Trip Provider for College of Charleston Hillel, not only allowed a stop in Hadera, but we were able to coordinate a “Partnership Activity” between the participants and citizens of the city.

On our third day, after a morning in Tzfat, we headed to Hadera. Our first stop was actually to pick up the 8 Israeli soldiers who would be joining the group for the next 5 days. We had a brief icebreaker, then boarded the bus to go to the “Partnership Activity”. Our Israeli tour guide, Noam Harel, revealed that we would be going to an elementary school to help students paint a mural. When we arrived all of the children had lined up and collectively greeted us by warmly shouting, “Welcome to Israel!”

The participants were very excited and immediately began trying to interact with the schoolchildren. Some children spoke English fluently, while others whose English was not great, acted out and pointed to things while speaking Hebrew. Most of the American participants did not speak Hebrew, so they also “played charades” to help the children understand what they were trying to say. The Israeli soldiers who were fluent in both English and Hebrew often helped bridge the language barrier. No matter what level of fluency, everyone found a way to communicate and help one another paint the mural. Participants and Israeli soldiers lifted the small children to reach higher portions, and crouched down with them to paint the lower areas. By the end, everyone was playing on the playground, facing off in a game of basketball, or reading a book in Hebrew out loud to the children.

This was such a special experience for participants to have, to try to communicate across a language barrier and work together with children and their new friends, the Israeli soldiers, to accomplish a common goal. Joseph Siegal ’19, a student at College of Charleston, found a greater meaning in this activity by explaining, “Seeing the looks in their [children] eyes when meeting our group of American college kids was inspiring. It reminded me that my generation of Jews in the United States has a responsibility to ensure that Israelis always have a partner in Americans.”

Thank you to Charleston Jewish Federation and our friends in Hadera for giving Birthright participants this unforgettable opportunity. We hope to include a stop in Hadera on CofC’s next trip this winter!

Did you know that Federation supports the Birthright program through our annual community campaign? When you give to Federation, you are supporting opportunities like this one to connect our next generation to the people and land of Israel.

To learn more and get involved with the Parnership 2Gether program which builds connections between the people of Charleston and the Hadera-Eiron region of Israel, click here.