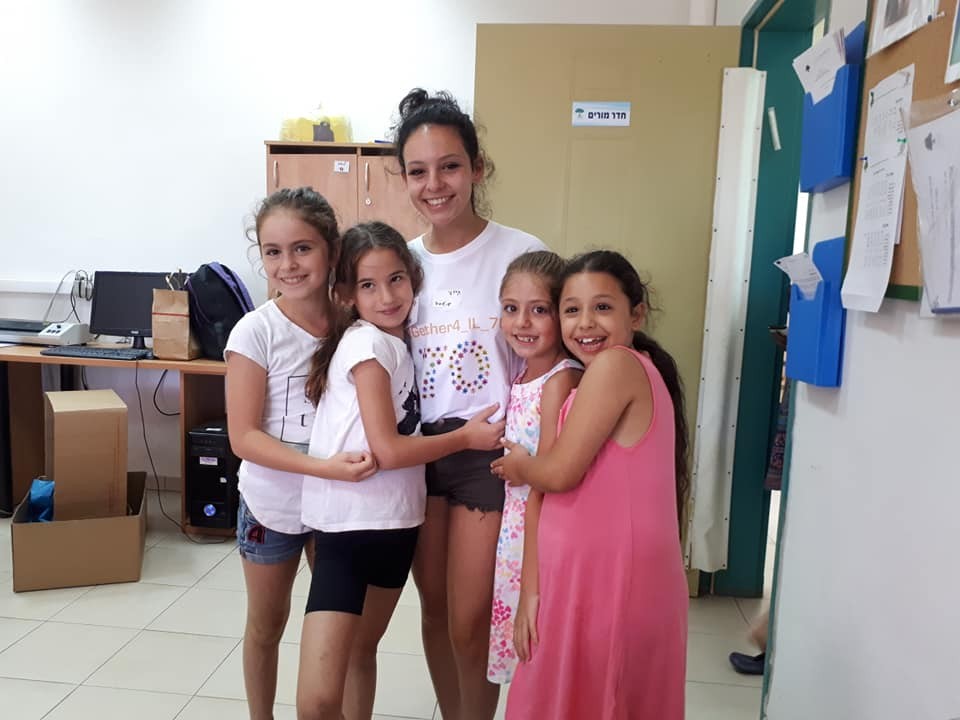 This past summer, Porter Gaud junior Katie Krawcheck was the first Charleston teen to participate in Charleston Jewish Federation's Tikkun Olam Teen Exchange program. Along with peers from across the Southeastern U.S., Katie lived with a host family in the Hadera-Eiron region and volunteered across the country with Israeli and American peers. Examples of her experience include working in a Kaytana (camp) in Pardes Hanna and getting her hands dirty in an Agricultural farm in Hadera. This is Katie's essay about her experience:

Before a Jewish teen embarks on his or her journey to Israel, he or she is typically bombarded with a multitude of good wishes, as well as the hope that their trip merits some sort of “spiritual awakening.” As for me, I didn’t know what to expect; this would be my first time in Israel. I was going to be the only person from Charleston (or even South Carolina) on this trip. I had only met the other American teens over a video chat once. And, of course, I wasn’t familiar with any of the Israelis aside from my host, Maya. I could tell that this was going to be an experience unlike anything I’d ever done before. And that presented many challenges.

For one, I was worried about how easily I would actually click with all the other kids. Would there be cultural differences? Language barriers? And as for somebody who isn’t incredibly practicing to begin with, as somebody who considers herself to be culturally Jewish as opposed to religiously so, I was worried that there would be some major religious differentiation between the rest of the teens on the trip and myself. More specifically, I was worried that my lack of a solid Jewish identity would clash with what I thought would be each teens’ confident Jewish affiliation.

But as soon as I arrived at the airport in Tel Aviv, we were greeted by the Israeli teens with open arms, as well as posters and signs reading, “Welcome to Israel!” The whole group broke out into hugs and laughter, and I think that we all felt the same powerful connection--we were all Jewish teens. But we were Jewish teens in our homeland: Israel.

And just like that, everyone seemed to click immediately. And by the end of the day, we all knew and loved each other as individuals. It took no time at all to know each other -- to understand and relate to one another. Aside from the fact that the Israelis were all incredibly bilingual (while most of the Americans’ Hebrew vocabularies were similar to that of a first grader), we all came to the realization that we’re more similar than we are different. And as it turns out, many of the American teens were struggling with the same Jewish identity crisis as I was. It wasn’t until we started talking to some of the Israeli teens that we started to truly understand that you don’t need to conform to somebody else’s description of an ideal Jewish person in order to actually be Jewish.

This is a notion that took a bit of time for each American kid to understand and accept while on the trip. But when you’re surrounded by 15 other kids exactly like you--15 other kids who struggle with the same crisis of finding a “proper” Jewish identity--when you’re able to watch as half of those kids, the ones who live in a predominantly Jewish state, are comfortable with the identities that they’ve assigned themselves...  it’s life-changing. It moves you. It reassures you that you aren’t alone, that there are teens all the way across the world who are in the exact same boat as you. It reassures you that you have a support system, even 6,300 miles away. You meet these people, and suddenly you understand the whole notion of an “awakening.”

For me, it wasn’t spiritual; it was personal. It was a rediscovery, a resurfacing of my own Jewish identity. It was the realization that my Judaism is how I choose to define it--without the obligation of living my life as the Jewish girl other people want me to be. When I’m with these kids, I forget that there are only around 15 Jewish kids in my high school. I forget that I don’t have many Jewish neighbors or very many Jewish peers. Because when you’re in Israel, staying with a host family, living your life as a true Israeli teen, you forget that you grew up in the South. You forget that, for you, it isn’t normal to walk down the street on Saturday mornings with the words “Shabbat Shalom” tumbling clumsily out of your mouth to every person you pass. You forget that this lifestyle isn’t at all like your own. Because for the two weeks that I was there, Israel became my lifestyle. Israel became my home.

The night before we climbed Masada, two of the Israeli teens brought their guitars to the Bedouin site where we were staying. It was probably 85° outside, but we were all crowded around a campfire, drinking hot tea and making s’mores. About an hour before, the teens had gathered up in a tent for an impromptu rehearsal. We were all laughing as we strained our vocal chords to sing songs like “Hallelujah” and “Riptide.” At the time, I think we all thought that we sounded like the most talented choir of Jewish teens to ever exist. But looking back at videos of our performance, I’m not so sure that was truly the case. Nonetheless, I remember that when we finally sat around the campfire, it felt like instinct to put our arms around one another. We only had 14 days together. There were only about 5 days left. I distinctly remember this bittersweet feeling of pure and utter bliss. I remember sitting there and thinking to myself, “I’m so content right now… how am I supposed to leave my new family?” It was a harsh reality that we’d soon have to face. So we held on tightly to each other--even in the heat of an Israeli desert--knowing that in just a few days, we’d have to let each other go.

Israel really is home. When you’re there, you feel overwhelmed with an inexplicable feeling of love. Of belonging. Of family. It’s a feeling that not very many people have the opportunity to even try to comprehend. It’s a feeling that I will never take for granted. And it’s a feeling that you’ll never truly understand until you’ve been there yourself, singing “Wonderwall” around a campfire with 15 of your new best friends.

Open to all rising 10th and 11th graders in the Charleston area, Tikkun Olam Summer Exchange Trip is a once-in-a-lifetime experience off the beaten tourism track. This incredible opportunity combines touring and community service, planned programs and free time with your Israeli family. Participating teens will:

COST: $2,000* (including airfare, all meals, programming, and accommodations in Israel. To receive more information, contact Rebecca Engel at RebeccaL@jewishcharleston.org or 843-614-6484