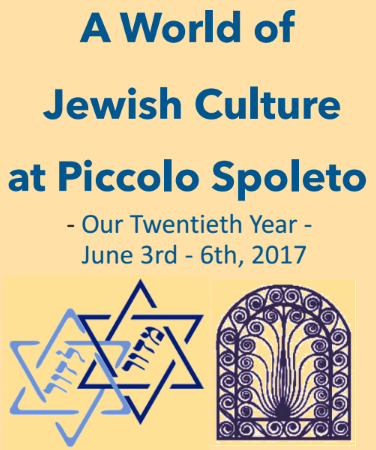 A WORLD OF JEWISH CULTURE

View The 2017 Brochure of Events Here

Inaugurated in 1998 as a joint project of the Yaschik/Arnold Jewish Studies Program at the College of Charleston, in cooperation with Piccolo Spoleto. A World of Jewish Culture 2017 is again sponsored by the Herzman-Fishman Charitable Fund, with a supplemental grant from Mindy Seltzer and Bob Lovinger. This year’s festival will include various tributes to the recently deceased musician, songwriter, poet, novelist, and painter Leonard Cohen.

Enjoy a wide variety of music from local and regional talent in this annual showcase of Jewish singer/songwriters, musicians, and composers. Jewish Coffeehouse performances will feature multiple genres - from American folk and singer/songwriter to Sephardic, liturgical, klezmer, and jazz. Atlanta’s Congregation Bet Haverim Chorus and Band will present (9-10pm) a cross-section of their diverse and vibrant repertoire: from secular/ sacred mash-ups which emphasize the spiritual underpinnings of the human condition to multifaceted original choral works reflecting the many ways we can hear the Jewish voice.

The second set (10-11pm) will be local jazz musicians Zachary Gilbert (clarinet, saxophone) and Noah Jones (piano) and will be comprised of charts by Jewish composers, including Irving Berlin’s Blue Skies.

Join us for the screening of three documentary films in their Charleston debut, each depicting a different style of Jewish music. All films will be shown in Arnold Hall, Sylvia Vlosky Yaschik Jewish Studies Center. 96 Wentworth St., Admission: $8 per screening.

Legendary poet, singer/songwriter and alleged ladies man Leonard Cohen is interviewed in his L.A. home about his extraordinary life and times, interspersed with old footage from his private photo collection, and lavish praise plus elaborately performed Cohen cover songs from a motley crew of fellow musicians.

*This screening will be followed by a talkback with filmmaker Robert Philipson. Out of all the cross-cultural encounters that have resulted in the richness of American popular music, none has been so prominent or so fraught with fraternity and conflict as the relationships between African Americans and American Jews. Body and Soul: An American Bridge aims to tease out the strands of this cultural knot by focusing on the early performance history of the jazz standard, “Body and Soul,” one of the most recorded songs in the jazz repertoire. Composed by Jewish composer Johnny Green in 1929, the song was introduced on Broadway by Jewish torch singer Libby Holman and ushered into the jazz canon by Louis Armstrong the following year. Four years later, the successful recording of "Body and Soul" by a behind-the- scenes Benny Goodman trio which included the Black pianist Teddy Wilson, led to the historic smashing of the color barrier in popular music.

The Alaev Family, a multigenerational family folk-rock group, has been performing for more than 50 years, blending Eastern European, Jewish and Roma influences in unforgettable performances. After the fall of the Soviet Union, their benevolent dictator, Papa Allo, moved his clan from their native Tajikistan to Israel, where he has continued to exert his will. Only his equally strong-willed daughter, Ada, has dared to resist until now. As Papa nears 80, the patriarch's power begins to slip further, calling into question the future of the family business.

The Jewish Choral Society of Charleston, under the direction of Madeline List Hershenson, is proud to be celebrating their nineteenth season. Their repertoire of Jewish music includes sacred and secular works from the U.S., European, Ashkenazic, Sephardic, Yemenite, and Israeli traditions, as well as concert pieces and contemporary music. For the first time, the JCS will join together with the chorus from Atlanta’s Congregation Bet Haverim in an eclectic concert of Jewish choral music.

Professor Jonathan Karp of Binghamton University will deliver a dynamic multimedia presentation on the late Canadian singer, songwriter, musician, poet, novelist, and painter Leonard Cohen (1934-2016). While Cohen was a student of many world religions, he was proudly a Sabbath-observant Jew, and member of a modern-Orthodox synagogue. His musical career was infused with Jewish content, perhaps no more so than in his final album, “You Want it Darker”, released weeks before his death. The album is a somber confrontation of mortality, and the titular track includes Cohen singing a translation of the Jewish mourner’s prayer. Karp will present an overview of Cohen’s music through images and recordings of his performances. A selection of Cohen’s most popular songs will be performed live.

Enjoy an evening of consummate chamber music with Charleston’s own Yuriy Bekker, pianist Andrew Armstrong, cellist Natalia Khoma, and special guest violist Michael Klotz. The diverse program will feature very moving works by Darius Milhaud, Gideon Klein, Leonard Cohen, Hermann Schulenberg and Dmitry Shostakovich. These composers left a tremendous mark on Jewish culture through their music: Gideon Klein’s stunning String Trio was written in the Terezienstadt concentration camp, and Shostakovich’s epic piano trio no. 2 contains Jewish themes in the last movement. As always, this concert is not to be missed: where else would you see a classical trio performing the music of Leonard Cohen?

WHERE TO BUY YOUR TICKETS