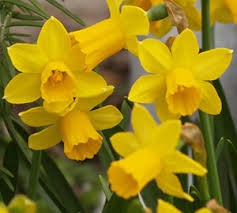 College of Charleston student collaborates with the City of Charleston Department of Parks, Charleston Parks Conservancy, the Yaschik/Arnold Jewish Studies Program and the Charleston Jewish Federation to beautify Marion Square Holocaust Memorial and inspire the next generation to learn from the lessons of the Holocaust.

On Sunday, November 13th, 2016 at 4:30PM the community is invited to plant daffodil bulbs as a living memorial to the 1.5 million children who perished in the Holocaust, The Holocaust was the catastrophic murder of eleven million human beings between 1938 and 1945 throughout Nazi Germany, German-occupied territories and territories held by allies of Nazi Germany. Six million of those victims were Jewish. Five million others were murdered for their religious beliefs, political views, sexual orientation, or physical and mental disabilities.

The garden will be planted at the Charleston Holocaust Memorial in Marion Square, erected in 1999 “to remember those who were murdered in the Holocaust and to honor the survivors who came to South Carolina to rebuild their lives.”

After discovering her family’s own history with the Holocaust, and traveling to Eastern Europe in the summer of 2016 with College of Charleston Zucker/Goldberg Professor of Holocaust Studies Theodore Rosengarten, CofC Honors student Samantha Krantz ’19 was empowered to bring her experience back to the Lowcountry as the recipient of the Klaper Fellowship in Jewish Studies, which charges recipients with bettering the Lowcountry. With the help of community volunteers, Krantz hopes to plant 1,800 daffodils alongside the Holocaust Memorial in Marion Square on November 13th at 4:30PM. A brief ceremony will precede the planting, with remarks delivered by local Holocaust survivor Joe Engel and philanthropist Anita Zucker, herself a child of Holocaust survivors.

“By planting daffodils with local community members alongside the city’s existing Holocaust memorial, I hope to create a living memorial of flowers so that residents and visitors to Charleston may be further inclined to learn about the Holocaust, and its connection to Charleston. Each year the eighteen-hundred daffodils will return with a burst of color in honor of the survivors and the innocent lives that were taken too soon." –Samantha Krantz

The Daffodil Project, a worldwide initiative empowering Holocaust education created by the Atlanta- based non-profit Am Yisrael Chai, aspires to build a Living Holocaust Memorial by planting 1.5 million daffodils around the world to remember the children who perished at the hands of the Nazis. Daffodils represent the yellow stars that Jews were forced to wear during the Holocaust, and the flower symbolizes both remembrance and resilience. By drawing attention to the memorial through the Daffodil Project, members of the Charleston community can work together to pledge that these victims will not be forgotten.

Krantz’s efforts are being supported by the College of Charleston Yaschik/Arnold Jewish Studies Program, the City of Charleston Department of Parks, Charleston Parks Conservancy, and the Charleston Jewish Federation’s REMEMBER Program for Holocaust Education and Genocide Awareness.