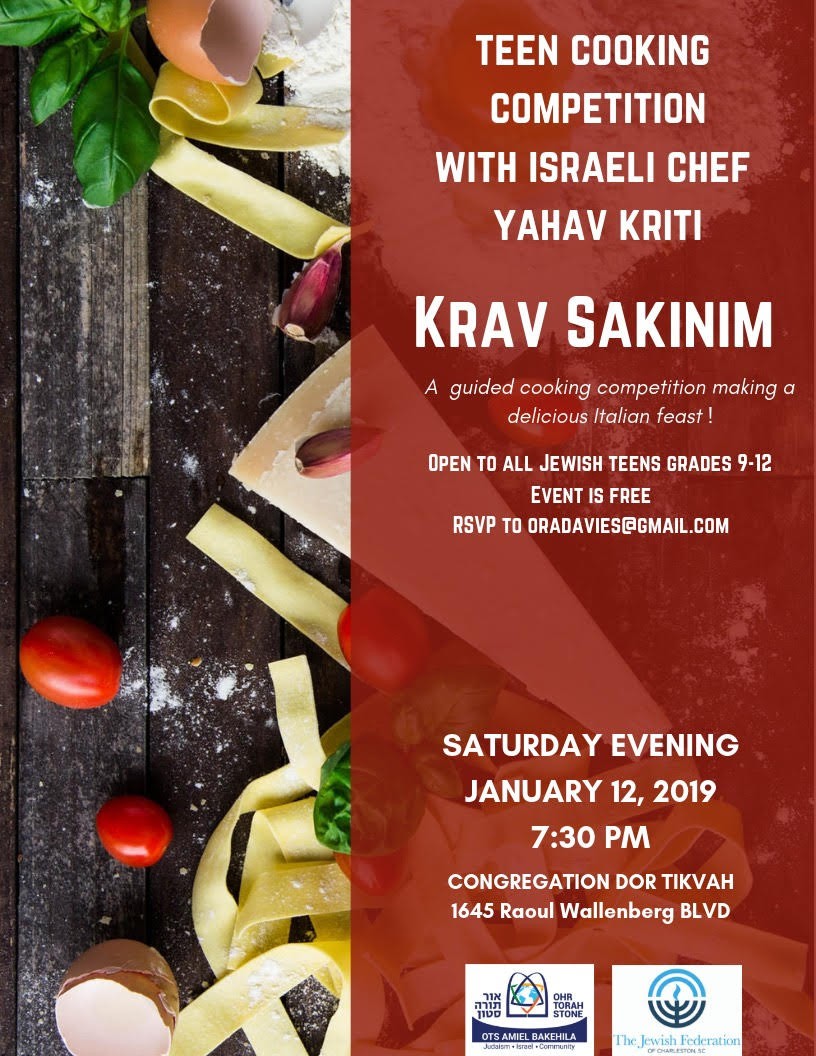 OTS Amiel BaKehila, part of Ohr Torah Stone, is an exciting initiative under the auspices of Israel's Ministry of Diaspora Affairs aimed at empowering Jewish communities around the world through Jewish Education, Israel Engagement, and Jewish Arts & Culture. Charleston is one of six North American communities that are participating. Each of the seven visits will bring a selection of Jewish educators and artists with a variety of backgrounds and affiliations.

Rabbi Aaron Goldscheider served for twenty years in pulpits in Florida and New York, before his aliyah to Israel in 2012.  He is author of two books: ‘The Light That Unites‘ which focuses on Chanukah, and ‘The Night That Unites Haggadah’ (Urim Press) and ‘ לילה של אחדות ’ (Yediot Achronot Press) which highlights the teachings of Rabbi Joseph Soloveitchik, Rabbi Isaac HaKohen Kook and Rabbi Shlomo Carlebach on the Passover Seder.  He is also the founding director of the “In Our Hearts Project” which is dedicated to being a resource in the Jewish community for families that have experienced the loss of a child.  Contact Rabbi Goldscheider.

Sagit Peretz Deri is an Israeli speaker and activist in the areas of Judaism, feminism, Israeli politics, Mizrachi culture and Sephardic Halachah. A real-estate lawyer by profession, she works to promote inclusion of Mizrachi representation, culture and tradition within the larger religious community in Israel, as we as for greater inclusion of women in traditional Jewish frameworks. She has spoken at numerous forums and educational institutions, including at Tel Aviv University and for Israel’s Ministry of Education.

Peretz-Deri has written for Ha’aretz, Mekor Rishon, and other Israeli newspapers and websites, and has appeared on Israeli television and radio (Channels 1, 2, 10, Army Radio, and others) to discuss Judaism, women, socio-economics and the ethnic gap in Israel. In 2014,  in an effort to bring a feminist and Mizrachi viewpoint to the traditional political class,  Sagit served as the founding Chairwoman of the Womens’ Forum of the Bayit Hayehudi political party. Sadly, she failed to find a receptive audience for her message of inclusion, and subsequently publicly left the party a year later. In addition to her law degree, she also holds a Masters Degree in Advanced Talmud from Bar Ilan University.

Chef Yahav Kriti has always loved both performing and food. During a stint as a entertainer in Eilat, he found himself following the chef trying to learn as much as he could. It was then that he decided to combine his two great passions: showmanship and food.

Yahav never wanted to be a chef hidden in the kitchen without any connection to his customers or diners. So, after training to in the Culinary Arts at the Tadmor School in Tel Aviv, he created “Chef on Wheels” – (“Chef al Galgalim“) – which travels around Israel and the world bringing fun, tasty culinary events to large and small groups. His events mix humor with culinary expertise and interactivity, creating a fun and exciting experience for all.