Partnership2Gether connects regions in Israel with specific Jewish communities outside of Israel.  Established by the Jewish Agency for Israel (JAFI) in 1995, over 500 Diaspora communities have been matched with forty-five regions in Israel to bring Jewish people closer together as equal partners on joint projects and activities.

In Charleston, Partnership 2Gether is a community initiative of the Charleston Jewish Federation that seeks to create people to people connections with the Jewish members of our community and the Jewish members of our partnered communities in the Southeast Consortium and in Hadera-Eiron, Israel.  We have joined together with other communities in the Southeast United States including Charlotte, Nashville, Knoxville, Chattanooga, Richmond, Pinellas, Volusia County and Fort Myers to create the Southeast Consortium.

Partnership 2Gether is committed to creating meaningful, lifelong bonds between Israelis and Diaspora Jews.  We organize and offer programs for members of all different ages in our community to have the opportunity to learn and interact with Israelis both here and in Israel.  Our programs include teen summer travel and host exchanges, educator exchanges, physician and firefighter exchanges and partnered classrooms in our local Jewish schools.  These connections deepen Jewish identity and strengthen our resilience as a people by demonstrating that Jews everywhere are part of the same family and are responsible for each other.

If you would like to get involved with Partnership 2Gether or want more information about any of our programs, please contact Erin Boynton at 843-614-6491 or erinb@jewishcharleston.org. 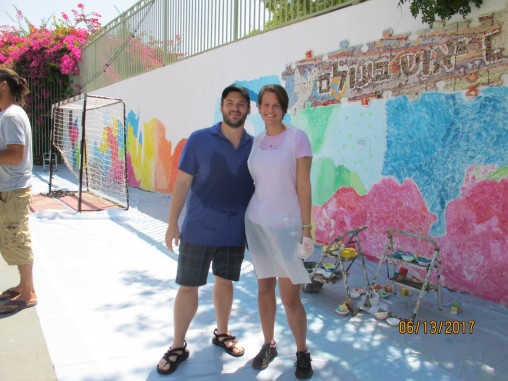 We welcome anyone from Charleston who has plans to be in Israel to consider a visit to the region, where you will be greeted by our friends, offered home hospitality, and provided with a customized behind-the-scenes off-the-beaten-path tourism experience based on your interests. To explore the potential, contact ErinB@jewishcharleston.org.

The "K'han" Museum is located in the historic center of Hadera. The impressive sandstone building was, originally, an Ottoman farmstead building dating from the mid 1800's. The building, together with the surrounding lands which make up the city of Hadera, was purchased in 1890 by four Zionist organizations from Eastern Europe.

For six years, the K'han served as temporary living quarters for Hadera's first settlers. Only 11 original rooms remain today; Those house the city's archives, as well as displays narrating the history of Hadera. The rooms are also used for the purpose of cultural and educational activities. While in The K’han’s lecture room, you will also be standing in what was Hadera’s first synagogue, founded by the pioneers in 1891. For more information about the museum, visit the website.

The Founder’s Park was initially planted in 1911 to serve as an experimental plantation for Aharon Aharonson. It was renovated in 1990 by the world renown artist Dani Karavan to combine the old and new, as well as to commemorate the region’s founders and its fallen soldiers.

Situated in the historic center of Hadera, the park is home to the Yad La'banim memorial hall and the municipal library, which traces its beginnings to 1911.

Technoda was established in 1986 through the Project Renewal program of the Jewish Agency for Israel to provide science enrichment classes during school hours and after-school activities in science and technology for disadvantaged children in the Givat Olga neighborhood of Hadera. High-quality programming at the Technoda quickly drew hundreds and then thousands of  children -- including recent immigrants from Ethiopia and the former Soviet Union -- from other parts of Hadera and eventually the entire central region of Israel.

The only science and technology center of its kind between Tel Aviv and Haifa, the Technoda today welcomes over 250,000 visit  annually of children and youth from every background, ethnic group, religion and lifestyle in Israel and serves as a regional center for gifted children and for teacher training.

Alexander Stream has the largest population of soft-shell turtles in Israel.

In the heart of Alexander Stream National Park is a kurkar hill, atop which stand the remains of a building from the end of the 19th century. It was apparently used as a customs post by the Ottoman authorities, and the vaults characteristic of Turkish architecture can be seen here. As a result of kurkar (coastal limestone) mining in ancient times, caves have formed on the southern slope of the hill, and in winter and spring the area blooms with an abundance of attractive flowers.

Alexander Stream estuary – the point at which the stream flows into the sea is to the north of Bet Yanay beach. At this point there was a small harbor in the 19th century, used for the watermelon trade. During the British mandate, the harbor was used to land ships carrying illegal immigrants, and in 1948 the Altalena anchored here, bringing weapons for the IZL, but was forced to continue to the shores of Tel Aviv.

Bet Yanay beach – this is one of the most beautiful and well cared for beaches in the country, attracting thousands of vacationers every year. The beach has lifeguard services, open spaces, shaded areas for the use of the bathers, a toilet and shower block, and a campsite that is separate from the regulated beach.